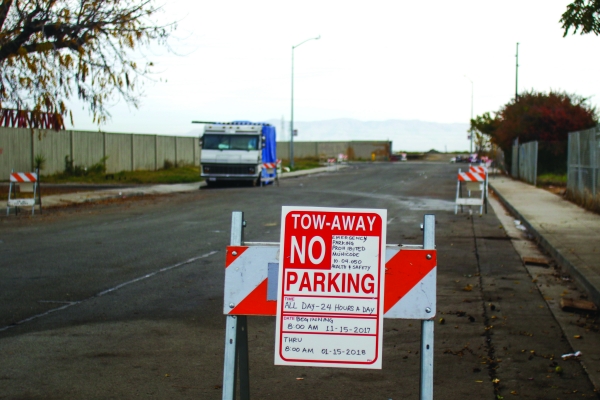 Signs placed by the city of East Palo Alto warn RV dwellers that their vehicles must be moved by Nov. 15, 2017 due to public health concerns and anticipated flooding as a storm nears. Photo by Veronica Weber. 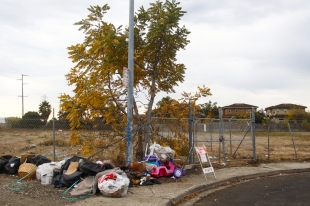 On Weeks Street in East Palo Alto, many neighbors have complained that the area is full of human waste, trash, debris and other blight that is dangerous to human health. Photo by Veronica Weber.

About 200 people packed the East Palo Alto City Council Chambers and more than 43 speakers gave East Palo Alto city officials a piece of their minds on Wednesday night regarding a potential ordinance on RV parking on Weeks Street and a ban on all oversized vehicles on city streets.

The emotional testimony, during which members of the public directed criticism toward city staff, was ignited after the city instituted an emergency ordinance to remove about 10 RVs on the 1100 block of Weeks Street from Pulgas Avenue to the baylands. Police and staff notified the RV residents on Tuesday at around 3 p.m. and said the RVs had to clear out by 8 a.m. Wednesday morning or they would be towed.

The proliferation of RVs and oversized vehicles are the latest sign of change due to gentrification, many residents said. With rents rising beyond what they can afford, they have nowhere else to go but into mobile housing.

But other people who have lived in the city for decades said they are tired of oversized commercial trucks creating safety issues and nuisances. All sides agreed the city should find solutions to the RV problem so that people can stay in the community.

On Wednesday night, the Public Works and Transportation Committee considered recommending a staff-proposed ordinance to the City Council that would continue the emergency ban on Weeks Street for a minimum of 60 days. Staff decided to close the street out of health and safety concerns related to human waste dumped by RV residents. The waste had clogged a storm drain that workers from West Bay Sanitary District had tried to clean out.

Assistant City Manager Sean Charpentier said staff also found excrement on the street, in the adjacent baylands and on the Bay trail. The city issued the eviction notices ahead of Thursday's rainstorm so workers could clean and disinfect the area. The city was concerned that street flooding would cause contamination to spread, creating further health hazards and potential liability under state environmental protection laws.

Charpentier said the street would require professional cleaning by a decontamination company. The area also was littered with trash, bottles and other debris. (On Thursday morning, he emailed a photograph of a flooded Weeks Street taken during the rainstorm. The water covered the curbs and flooded the sidewalks.)

The proposed ordinance would also prohibit parking of oversized vehicles on city streets that are taller and wider than 7 feet and more than 20 feet in length. Charpentier said that staff is pursuing the ordinance after a September public workshop on transportation and parking issues identified the oversized vehicles as one of residents' top concerns. Currently, it is illegal to park in any location for more than 72 hours, but residents said that many of the large vehicles are there for months.

Nearly everyone agreed RV residents should receive support from the community and the city in the form of off-street locations where they can stay, be safe and receive basic services so they won't be creating health and sanitation problems. Commissioner Bernardo Huerta pointed out that staff should not paint all of the RV owners with the same broad brush as polluters. He and others noted there are a few residents who cause the problem; most of the others are responsible and take their waste to facilities in Redwood City and elsewhere, where they pay a $25 to $35 dump fee.

Commissioners and advocates said that resources should be identified to help those in need with the dump fees or by providing inexpensive waste services.

Some residents and commissioners pledged to work to get something accomplished. Patsy Caracter, a Weeks Street resident who opposes the RVs parking on her street, said she would organize churches in the city to find parking lots where the RVs could stay.

"I know every pastor in this community and I will personally take on trying to find places," she said.

East Palo Alto Pastor Paul Bains, co-founder of Project WeHOPE, a nonprofit working with the homeless population that runs a 55-bed emergency shelter, proposed that the city work with nonprofits and the faith community to develop a safe-parking initiative similar to one in Santa Barbara.

Locations in East Palo Alto, perhaps at some of the 50 church sites, would potentially allow the RVs a parking haven during overnight hours. The program would have portable toilets, trash receptacles and security. The program would be a short-term solution while the city works on longer-term solutions, including housing for extremely low-income residents.

One resident who asked that her name not be published said her brother owns a closed RV park on Woodland Avenue with room for 15 spaces that might be available temporarily, and others suggested some closed business lots near Bay Road.

A large contingent of Stanford University students supporting the RV residents attended the meeting and added to the hours of public comment Wednesday, with some East Palo Alto residents expressing dismay that more community voices were not being heard as the hour became late.

But the Stanford students said the university plays a role in the housing crisis and RV issue and said they would press university administrators to help identify a place for their service workers who are living in RVs to stay on Stanford land.

A few RV dwellers living on Palo Alto's streets in June said that they work at Stanford Hospital, in clinics and at the University but they cannot afford housing in the area.

Some commissioners said early in the meeting that the RV and oversized vehicle issues should be uncoupled. The immediate concern is about how to help the RV community while the overall issue of commercial trucks, vans and larger vehicles that clog residential streets merits a longer discussion.

Commissioner Arthur Lee Gray, a trucking company business owner, said that a blanket law banning all oversized vehicles would disenfranchise many longtime business owners who depend on their trucks for their livelihoods.

"I will continue to park my truck at my home" if a ban is passed, he said. He valued his truck at $100,000 and said he is not willing to park it where it would be vandalized.

J.T. Faraji, a longtime resident and activist who spearheads the community group Real Community Coalition, said a total ban would be completely unacceptable.

"This is an attack on the working class and the working poor in our city. I know a lot of truckers who use those trucks to feed their families," he said.

But other longtime residents said the quality of life in East Palo Alto has deteriorated and become dangerous because of oversized vehicles, which were not prevalent until a few years ago.

"When I walk across Pulgas, I've nearly been hit by cars," said Dixie Specht-Schulz, who said that she cannot see oncoming cars and they cannot see her as she tries to walk in the crosswalk because of wide, oversized trucks parked nearby.

Many trucks are also not owned by East Palo Alto residents. Specht-Schulz said she has called the owners of some commercial vehicles whose businesses are out of town.

"They say, 'We can't do it in Mountain View, but we can do it in East Palo Alto,'" she said, referring to parking.

Commissioners voted 4-1 to table the ordinance, consider alternatives at their next meeting and uncouple the RV and oversized vehicle issues. They recommended staff immediately begin working with the faith-based and nonprofit community on finding temporary solutions for the RV dwellers.

Charpentier said the proposed ordinance would still be taken to the City Council on Dec. 19, without formal recommendation by the commission.

See more online: Watch Palo Alto Weekly journalists discuss the issue of RVs in East Palo Alto on an episode of "Behind the Headlines," which can be found here.

Good for them. Time to take back control of our streets.

We are not a dumping ground for the entire region’s problems.

There is no "closed RV park"'on Woodland. There is a mobile home park with residents. The owners have tried some dirty tricks to try to pressure them into leaving. They are being dealt with on a case by case basis.

Why can’t they commute like everyone else? They are just stubborn. If they can’t afford to live in the most expensive area of the nation, they should move to the Midwest. It’s simple; no one HAS to live here.

It's pretty sad that people are uninterested in the follow up to all the drama last week, now that the complicated situation is being addressed.

Report Objectionable Content
Email Town Square Moderator
6 people like this
Posted by Marie
a resident of Midtown
on Nov 20, 2017 at 3:06 pm


Thank you Stanford Students!! Stanford should take responsibility for RV dwellers who are here for treatment at Stanford Hospital and working at Stanford. Palo Alto and East Palo Alto should not be subsidizing Stanford's inability to manage RV dwellers generated by Stanford policies. Maybe Stanford should have some housing dedicated to short-term workers or patients at subsidized prices.

Report Objectionable Content
Email Town Square Moderator
8 people like this
Posted by Anon
a resident of Another Palo Alto neighborhood
on Nov 21, 2017 at 2:25 pm

RVs are a public health hazard in cities and should be banned, just like outdoor pit toilets. Are they are problem in rural Wyoming? Probably not. But, they are not safe and scalable city housing. San Francisco/Oakland/San Jose is the fifth largest -city- (Combined Statistical Area) in the US-- and RVs are not a scalable way to provide affordable housing in a large city.

Singapore's oldest cafe was about to open in Palo Alto. Then, the coronavirus hit.
By Elena Kadvany | 4 comments | 7,516 views

A Pragmatic Approach to A Trillion Trees
By Sherry Listgarten | 4 comments | 4,370 views

Repairing a Disagreement with your Beloved & “Physical” vs. “Social” Distancing
By Chandrama Anderson | 2 comments | 3,077 views