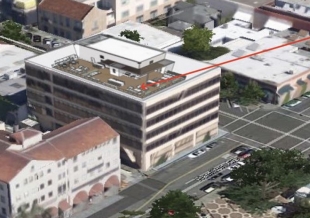 The City Council will discuss on Monday a proposal by Houzz to build a roof-deck patio at 285 Hamilton Ave. The illustration shows what the patio would look like. Courtesy of city of Palo Alto.

The best use for the roof is SOLAR PANELS. PALO ALTO wants to go green. This would be a good and leading example for the residents to also go green. Large area would make building self sufficient. GO GREEN

"Diners in downtown Palo Alto rarely have a chance to dine alfresco while enjoying a bird's-eye view of the streets beneath them. A tenant of 285 Hamilton Ave., a five-story building that stands across the street from City Hall and that houses the city's Development Services Center, is hoping to change that."

...that's the opening line from the article. Makes it sound like they are talking about restaurants behing able to serve diners on rooftop locations. The article then proceeds be 100% about a private business building a private roof deck.

Now, to be fair, maybe this shouldn't come as a surprise. Here in Palo Alto we are quite accustomed to hearing about cool things for the general public, only later to find out they are actually intended for private businesses only. They call it a "public benefit", but it's usually a boondoggle or a loophole. Exhibit #1: The Institute for the Future. Exhibit #2: Miki's farm fresh market. And there are a million others.

Remember the Korean restaurant on University that was supposed to replace the old Apple Store space with a new restaurant with a rooftop deck? I heard it was killed by the staff because they didn't know how to approve the rooftop deck.

I would like to have a city that encourages nice things instead of discouraging them. Making a code for a rooftop deck would be a good place to start. Maybe after that, we can have outdoor dining on University like Mountain View and Menlo Park have.

Report Objectionable Content
Email Town Square Moderator
13 people like this
Posted by Member
a resident of Adobe-Meadow
on Oct 28, 2017 at 7:51 am

It's important to make sure this doesn't become a loophole for private interests. Here in Palo Alto we are quite accustomed to hearing about cool things for the general public, only later to find out they are actually intended for private businesses only.


Be careful about a rule change that allows roof-top entertainment in all of downtown. Comp Plan encourages adding a lot more housing there - while the noise from rooftop decks might be okay for surrounding businesses, this change bakes in a noise conflict for future residents.

Report Objectionable Content
Email Town Square Moderator
2 people like this
Posted by 285 Hamilton
a resident of Downtown North
on Nov 26, 2017 at 12:21 am

This building is owned by Thoits Brothers Inc. not by Houzz.

So Thoits will get the increased building value, in addition to being 30 feet over the height limit.
Recall that Thoits is former councilmember Larry Klein's law firm, so no problem violating the zoning, I'd guess.