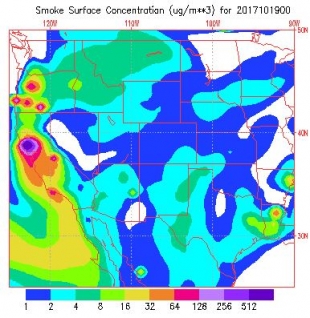 Smoke from wildfires in the North Bay and the Santa Cruz Mountains near Boulder Creek blanket the Bay Area on Oct. 19, 2017. Image courtesy of the Navy Aerosol Analysis and Prediction System/Naval Research Laboratory, Monterey.

The Bay Area Air Quality Management District has issued a Spare the Air alert for Wednesday and Thursday because of smoke from multiple wildfires in the North Bay that began on Oct. 8.

A smoke advisory has also been issued for Wednesday.

Strong winds have blown the thick smoke from the fires, which have burned tens of thousands of acres, throughout the Bay Area, air district officials said.

"Very unhealthy air quality from the wildfires in the North Bay is causing unprecedented levels of air pollution throughout the Bay Area," the district stated in a press release. "Outside of the active fire areas, air quality will be variable and unpredictable. Air quality may improve at times or get worse, very quickly."

Residents are advised to limit outdoor activities and to set air conditioning and car venting systems to re-circulate to prevent outside air from entering.

Elderly people, children and those with respiratory illnesses are particularly susceptible to the smoky conditions and should take extra precautions, air district officials said.

Parents and school administrators should check air quality readings before allowing children to practice outdoor sports, according to the air district.

Real-time air quality readings can be found at airnow.gov.

The Palo Alto Fire Department is helping to suppress the fires. The department tweeted Monday that its Engine 65 crew was sent out as part of a Santa Clara County team to help battle the Tubbs fire, which is burning in the area of state Highway 128 and Bennett Lane in the Calistoga area and has affected 36,432 acres since Oct. 8, Cal Fire officials said Tuesday morning.

Another Palo Alto fire engine was sent Wednesday to the Mendocino Lake Complex fire that has burned 38,730 acres since early on Oct. 9, according to Cal Fire as of Tuesday morning.

Palo Alto police have sent four officers to assist with the fire response, the department tweeted.

The Palo Alto firefighters took a video posted on Facebook Monday from Santa Rosa as they drove through the destruction where some trees were still standing, debris was smoldering and flames were burning.

Gov. Jerry Brown declared a state of emergency Monday in Sonoma, Napa and Yuba counties because of multiple fires in the areas.

There are an estimated 4,400 displaced people who are housed at shelters Wednesday, according to the state Office of Emergency Services, which has distributed more than 44,000 meals and 60,000 liters of water.

Locally, Palo Alto park rangers warned the public of a strong scent of smoke in the air stemming from the fires, according to an Instagram post. They also advised visitors with breathing or health problems to not visit the city's parks and preserves due to the smoke.

The city closed Rinconada Pool to the public on Thursday and Friday due to the wildfire smoke.

Anyone who sees visible flames or a clear source of smoke in the city is asked to call 911.

• Rising up to meet the disaster

• Where to donate for victims of North Bay wildfires

Editor's note: An initial version of this story stated the Tubbs fire burned about 35,000 acres, but Cal Fire officials have since clarified the size of the blaze was 28,000 acres on Tuesday, Oct. 10.

Can you stay healthy without making more trash?
By Sherry Listgarten | 7 comments | 3,212 views

Think about helping others in our coronavirus-affected area
By Diana Diamond | 7 comments | 2,922 views

The University of California’s flexible policies during COVID-19
By John Raftrey and Lori McCormick | 6 comments | 1,478 views