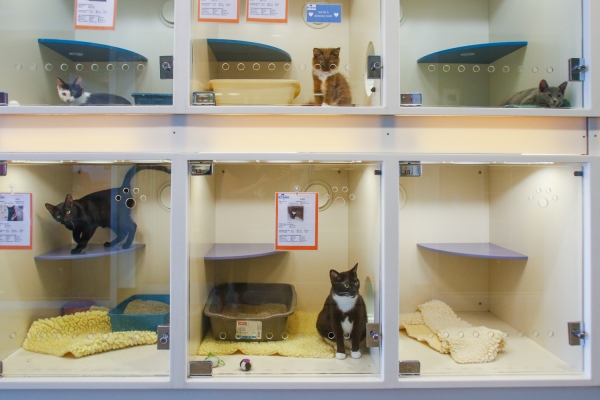 Cats and kittens are up for adoption at Pets In Need in Redwood City. Photo by Veronica Weber. 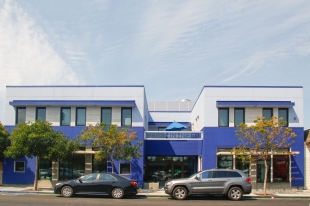 The Pets In Need shelter in Redwood City, completed in 2010, takes in about 800 animals annually. Photo by Veronica Weber.

I have trumpeted this thought in the past, and will repeat it now. A solid, responsible move by our city leaders to outsource this service. A wise fiscal move that will save city tax payers a substantial cost burden. Pets in Need by most accounts have a positive reputation, and should be capable of providing more than adequate services.

An example that should be followed and applied to other city services, wherever possible. One important element of long term fiscal responsibility.

Please consider contacting Best Friends Animal Sanctuary for help. Many cities, including Los Angeles and New York, have shelters that have been supported by them and they're strong advocates for "save them all".

There is NO reason why the City of Palo Alto can't have a state of the art facility for our pets - how sad it would be for such a wealthy community NOT to do everything possible to build a new shelter with the partnering of Pets in Need and with donations from the residents.

Report Objectionable Content
Email Town Square Moderator
13 people like this
Posted by Marie
a resident of Midtown
on Sep 29, 2017 at 11:21 am


If there is a spiffy new building, there would be a much better chance of getting other communities, in particular Mountain View, to come back to PA. Their main objection was the building. I don't think they get the same service so they might be willing to come back. This could help the finances.

The other thing not mentioned, is the policy for euthanasia. When you can't be picky about the animals you take, as Pets in Need is (try surrendering a pet with them), there are some animals that just aren't adoptable, sad as that is. This is why public shelters are almost never no kill. They can't stop accepting animals, just because your facility is full. So the shelter will need to be much bigger than the current one, to minimize the number of animals that need to be euthanized.

It would be useful to know the total capacity of the current shelter, and the number of animals euthanized in a year, for reasons other than poor health.

I personally would be willing to give money to build a new shelter, as long as I knew they would for sure, continue to accept animal surrenders from residents of cities that support the shelter.

Report Objectionable Content
Email Town Square Moderator
34 people like this
Posted by Online Name
a resident of Embarcadero Oaks/Leland
on Sep 29, 2017 at 11:28 am

Report Objectionable Content
Email Town Square Moderator
21 people like this
Posted by Anon
a resident of Another Palo Alto neighborhood
on Sep 29, 2017 at 1:20 pm

It is imparative that we have an animal shelter here in Palo Alto. If we lose our shelter and services move to another city, our animal friends will suffer as will we. The further away an animal shelter is from a lost pets home town the less likely you will ever find it.
Work out the issues but keep it in Palo Alto.

When my Mom died, she left 2 cats. I needed to find a home and Pets in Need took them, after I agreed to give a $100 donation. Before I figured out that is what they wanted, it was kind of frustrating. I guess that is what was meant by they are selective in the animals they take.

Palo Alto's poor reputation is largely responsible for PIN being the only agency to want to work with them. It's sad, because some of the staff and all of the animals deserve better.

Why would PAAS need a state of the art shelter? It's not really necessary, given their intake.

City services should not be required to show a profit Folks

Report Objectionable Content
Email Town Square Moderator
7 people like this
Posted by Online Name
a resident of Embarcadero Oaks/Leland
on Oct 1, 2017 at 10:13 am


#Senior Blogger, of course city services *shouldn't* be required to show a profit but when the main goal of the city is to over-charge us for everything to fill the General Fund and to support their lavish salaries and benefits packages and $400,000 consulting contracts for their buddies, what do you expect?

They could have funded multiple animal shelters with the $2,530,000 in drought surcharges they made for a drought that officially ended 5 months earlier.

How much are they spending for their latest useless city survey? They mistakenly mailed out extras to various homes so a friend brought me her extra and we had a good giggle over it and how little space they left at they very bottom of a page for the "essay" question about what's PA's most important problem. They never even proofread the silly thing.


Report Objectionable Content
Email Town Square Moderator
4 people like this
Posted by Anonymous
a resident of Duveneck/St. Francis
on Oct 1, 2017 at 2:46 pm

A high quality well-run city animal shelter on San Antonio Rd near the Bay (I thought PA has a bit of land there?) sounds most worthwhile. Much prefer this over the city hall lobby remodelling that was so costly....