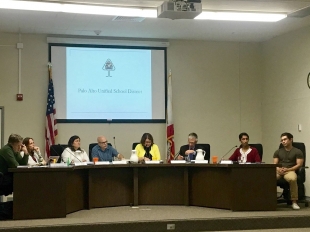 The Palo Alto school board approved revisions to the 2017-18 budget, but did not take a formal vote on a budget scenario moving forward, on Sept. 26, 2017. Photo by Elena Kadvany.

Could anyone document which fiscal years the school district's spending exceeded revenue? I think the numbers behind this "budget crisis" resemble the Trump admin's crowd count on inauguration day. I also think the methodology of many of the critics in Palo Alto is about the same as Trump's. But then, Palo Altans actually elected Dauber, et al.