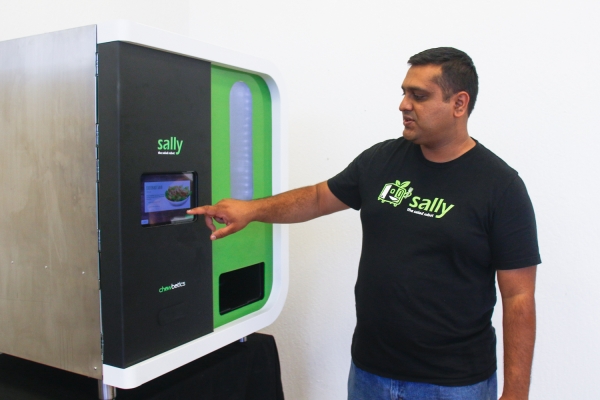 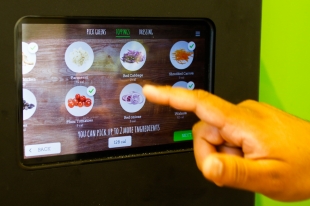 Chowbotics CEO Deepak Sekar originally came up with the idea for a robot that would cut down on repetitive cooking tasks, like chopping and stirring. Photo by Veronica Weber.

You've probably been in that lunchtime lurch before, when you're starving and you want something quick, easy and preferably healthy. You could go for the salad bar -- you know, the one that gets kind of messy during the lunch rush and kind of wilty and sad if you wait for the crowd to thin out. Or, you could just cave and opt for a sandwich.

But what if you had the option to build a customized, seven-ingredient salad, protected by more than just a flimsy sneeze guard, with the push of a button in about a minute?

With more than 100 patents to his name, Deepak Sekar, the founder and CEO of Chowbotics in Redwood City, invented just such a machine: Sally, which Sekar claims to be the world's first salad-making robot. It's currently located at Calafia Cafe & Market in Palo Alto and will soon expand to other restaurants.

A self-described "tech guy" who knew he wanted to work on robotics at some point, Sekar has a background in electrical engineering and a career in semiconductors. His interest in robotics and invention was a "side hobby," he said.

It wasn't long before Sekar found a problem and went searching for a solution. The seed for what would become Sally originated in a frustration in his own kitchen. While he and his wife were cooking Indian food at home, Sekar noticed that most of his time was spent on repetitive tasks like chopping and stirring. According to him, only 10 to 20 percent of the time they spent cooking was creative.

He set out to create a machine that would automate the cooking of Indian food, specifically curries. It took about a year.

"When I cooked, I just pushed a few buttons and I was done; when my wife cooked, it took her an hour," he said.

After creating the robot, Sekar met a man in the food industry who suggested starting with something "very simple and easy," like salad, in order to get the product to market before adding more complexity.

A year later, Sally the Salad Robot was born.

Two sleek Sally bots sit in Chowbotics' office in Redwood City -- one is the first prototype and the other, a slightly updated version with newer software and a more user-friendly touchscreen interface.

In a demonstration, Sekar showed how simple it is automate the building of a salad. Sally -- a rectangular box that looks more like a vending machine than a robot -- has a touchscreen that displays ingredient options and an image of the salad as items are added. You pick your greens, then toppings and dressing. With 22 ingredient canisters, Sally can make more than 1,000 different combinations of salads and can serve up 50 of them before she needs refilling.

It's an ideal healthy-food option, not only for restaurants but also hospitals, workplaces and cafeterias, Sekar said. Sally is the "smallest and most affordable cafeteria an office can have," he said in a promotional video for the robot.

"We all need to eat more healthfully on a regular basis," Calafia chef-owner Charlie Ayers said in the video, posted on the Chowbotics website. "As you see more and more restaurants trends, their emphasis and their platforms now are on health."

Ayers, who is also the executive chef at Chowbotics, said his philosophy on using seasonal, local ingredients aimed at increasing brain power is in line with how Chowbotics aims to use Sally.

Users can also choose from salad combinations created by Ayers and Kelly Olazar, a former Google chef and Calafia culinary services manager, such as ones dubbed "The Dish," which includes kale, quinoa, yams, walnuts, cherry tomatoes and marinated tofu, and "The Buddha," which has mixed greens, marinated tofu, barley corn salad, roasted yams, quinoa and cherry tomatoes. They're both dressed with a coconut turmeric vinaigrette.

For those interested in how many calories are in their salad, Sally also lists calorie counts.

To use the robot, you place a bowl under the salad dispenser and select your desired ingredients, or opt for a pre-set salad. The canisters within Sally, visible from the outside, then deposit the salad ingredients into the bowl.

If users forget to place the bowl in Sally, a fail-safe feature kicks in that stops the salad from being dispensed. This feature was added after Chowbotics tested it on users. What salad-eaters ultimately get is a fresh, temperature-controlled salad that Sekar believes is more hygienic than salad that sits out for hours in a buffet or salad bar.

Sally is still in beta-testing mode for another month or so, but the wheels are turning behind the scenes to expand her presence. Sekar said that 10 partnerships are in the works with "some of the biggest brand names around" and promised an announcement in October or November.

Sekar said that Sally can also help local restaurants address labor shortages in the increasingly costly Bay Area. It's common for workers to share a one-bedroom apartment with two to three people to make ends meet, Sekar noted, and many workers are opting to move away.

The robot is a "gift to the food industry," Ayers said in the video, in that it frees up operating revenue in a business with razor-thin margins.

As for whether food-service robots are going to take away humans' jobs, Sekar said the nature of people's work is always changing.

"Robotics is going to change the world in pretty dramatic ways," he said.

He cited the industrial revolution, the rise of manufacturing, the change in the retail landscape in the past 50 years and the shift in technology from a focus on hardware to software.

"People will need to adjust," he said.

In the meantime, Sekar is cooking up some new inventions.

"Think of Sally as the first in a series of food-preparation robots," he said, adding that the possibilities are almost endless. While he is working on a specific project to be announced later this year, many ideas for food-and-drink automation have circulated in the Chowbotics office, from burritos to cocktails.

Great idea with the 'salad bar'. I guess the salad ingredients could be washed in a natural food rinse such as Fresher4Longer (Herbal-Active) which not only gives the salad greens and other components an extended shelf life and freshness but also kills food pathogens. This makes it safer to eat too.

Looking forward to seeing these robot chefs spread around the world.


WIth the recent outbreaks of Hepatitis A in San Diego and LA, I'm ready for food untouched by human hands.

Report Objectionable Content
Email Town Square Moderator
2 people like this
Posted by Ahem
a resident of Another Palo Alto neighborhood
on Sep 26, 2017 at 7:15 pm

The Hepatitis A outbreak in San Diego was caused by San Diego's large homeless population defecating on the sidewalks and other public places, not food preparation.


Report Objectionable Content
Email Town Square Moderator
4 people like this
Posted by Ahem
a resident of Another Palo Alto neighborhood
on Sep 26, 2017 at 7:28 pm

Pretend it is all about a bright shiny future. If anyone challenges the model, call them Luddites, a technophobes, or deplorables.

Coronavirus: Plan ahead now for a big outbreak
By Diana Diamond | 22 comments | 4,630 views

The first few seconds after awakening; before I remember the virus
By Chandrama Anderson | 0 comments | 1,811 views

Can you Stay Healthy without Making More Trash?
By Sherry Listgarten | 2 comments | 1,144 views