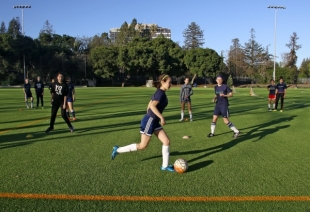 Girls in the Palo Alto Soccer Club perform soccer drills at El Camino Park on March 27, 2017. The Palo Alto City Council approved its new plan that will guide the city's park projects for the next two decades. Photo by Veronica Weber.

Bravo to the city council for their support of this updated master plan, and support for the city's parks and open space. As stated, now it is time to look for funding to support this new plan.

21 people like this
Posted by Resident
a resident of Another Palo Alto neighborhood
on Sep 12, 2017 at 8:48 am

Corporations should never ever be allowed to bump sports leagues for children or adults off their fields. If a Corporation is allowed an event (not that I am altogether in agreement with this) it should be some park where there are no regular sports practices or games scheduled.

Bathrooms should be available at Baylands. I was there on Labor Day and both centers were closed for the holiday so the only bathroom facilities were the portapotties. This is not good enough. We need to have the same type of facilities as many of the other city parks that are open from dawn to dusk, not just when the Interpretive Centers are open.

Please stop "fixing" the trails at Arastradero. Many of the beautiful single track trails there have now been destroyed. The very poorly constructed gravel golf cart paths that are taking the place of the nature trails are not only an eye sore, they are dangerous in many sections and very poorly designed from a drainage and longevity standpoint. Pouring gravel on well designed walking paths not only leads to erosion, but creates a soft shoulder that leads to twisted ankles, horse trips, and mountain bike falls.

If the city wants to see how a proper trail is constructed, head down to the Pogonip in Santa Cruz. Beautiful sustainable trails are being built there every day, without backhoes, steam rollers and gravel.

Report Objectionable Content
Email Town Square Moderator
22 people like this
Posted by Punt it to Residents
a resident of Old Palo Alto
on Sep 12, 2017 at 10:42 am

"Scharff suggested exploring a ballot measure to get the needed funding for the projects in the plan. His motion to approve the plan included a provision directing the parks commission to further consider funding sources, including a ballot initiative, to pay for the improvements."

Of course, have a ballot initiative and punt the costs for the residents to bear. Watch out residents, the Council votes to add more development, office and housing, overwhelm city resources, and then puts the burden on the residents.

Report Objectionable Content
Email Town Square Moderator
7 people like this
Posted by Onlinr Name
a resident of Embarcadero Oaks/Leland
on Sep 12, 2017 at 10:59 am

Something for the residents?? Oh, the horror. Let's take a big step back and think this through.

1. Scharff really pushed and pushed for a Ballot Measure. He said he wanted the commission to know it had the "Council's backing."
Except that he was speaking only for himself. No one else addressed the issue.

2. When the agenda turned to the Council discussion after the public spoke, he introduced Council's turn and said, "I may as well begin." This violates the role of the Chair. He takes liberties with the proper role of the chair, which is to make it possible for others to express their views before he does.

His authoritarian-parent takeover style is highly improper. And really unpleasant to watch.

Report Objectionable Content
Email Town Square Moderator
9 people like this
Posted by Curmudgeon
a resident of Downtown North
on Sep 12, 2017 at 8:28 pm

"His authoritarian-parent takeover style is highly improper. And really unpleasant to watch."

Nobody will ever mistake Scharff for a fair player. He has his agenda, and it ain't for the benefit of our town.

Report Objectionable Content
Email Town Square Moderator
6 people like this
Posted by Monica Engel Williams
a resident of South of Midtown
on Sep 13, 2017 at 8:14 am

Thank you Mayor Greg Scharff, the City Council, the Palo Alto Recreation Department, and all those involved in the Master Plan for a superb job well done! Approval of pickleball courts is particularly exciting. This sport is booming because it's easy to learn, inexpensive, and can be played by all ages from youth to super seniors. Our local Pickleball Club already has 300 members and is only too happy to help with the funding of pickleball courts. We want to share the joy of this fun sport with all the community so we are teaching Palo Alto residents at Mitchell Park for FREE most Wednesdays and Weekends at Noon. Come on over!

Report Objectionable Content
Email Town Square Moderator
1 person likes this
Posted by Ashok
a resident of another community
on Sep 13, 2017 at 9:55 am

Appreciate planning for more pickleball courts. This will bring joy to many. Thanks.

Report Objectionable Content
Email Town Square Moderator
3 people like this
Posted by Resident
a resident of Another Palo Alto neighborhood
on Sep 13, 2017 at 10:04 am

I am always pleased about new bathrooms, but I do see the problem with them attracting homeless encampments.

However, I am not sure that portapotties all over the Baylands doesn't do the same thing.

I would rather anybody have a proper flushing toilet with running water to wash hands than the bushes. I have had to take toddlers into a portapotty and it is not an easy thing to do particularly as most don't even have enough space for an adult as well as toddler let alone the inability to wash hands afterwards.

Report Objectionable Content
Email Town Square Moderator
5 people like this
Posted by Swim More
a resident of Addison School
on Sep 13, 2017 at 10:25 am

The city (after huge population growth ) needs a few more public swimming pools (such as Rinconanda ). Also, why are development fees not collected to increase parks and recreations - especially with all the variances and exceptions they seem to get?.


Report Objectionable Content
Email Town Square Moderator
7 people like this
Posted by Marie
a resident of Midtown
on Sep 13, 2017 at 12:51 pm


Although the new policy on private companies renting city facilities seems like it restricts companies, it seems likely to me that it expands it. My understanding is that current policy discouraged all private rentals. I thought you had to be a Palo Alto resident or a nonprofit or a company that provides services to Palo Alto youth or residents (soccer groups) to rent a group site or athletic field. Now the city explicitly allows renting PA facilities to private companies, albeit with a few restrictions.

It would be far better to say that residents and non-profits or groups serving Palo Alto youth and adults get priority. Private companies could only rent parks if no one else is interested. Given the demand in Palo Alto for sports fields, I doubt this would happen, unless someone again pays off an existing group with a reservation as Palantir did. That should not be allowed. Think of the inconvenience to parents and children expecting to attend a game in Palo Alto to find the game has been relocated at the last minute to facilitate a local corporation. The people inconvenienced by Palantir had no say - only the board of the organization.

Report Objectionable Content
Email Town Square Moderator
9 people like this
Posted by Online Name
a resident of Embarcadero Oaks/Leland
on Sep 13, 2017 at 1:04 pm

Re the parks and Rinconada, note that the proposed expansion of the Children's Zoo will eat into the parkland and eliminate 85 parking spaces needed by the Walter Hays teachers and parents trying to pickup/drop off their kids as well as Community Center visitors.

This area is already gridlocked with commuters and glutted with school parents pushed onto nearby streets, sometimes blocking our driveways.

Very very oddly, the city planning official Amy French has scheduled a hearing on this expansion for 8:30 AM, 9/21 at City Hall -- precisely when most of those effected will be otherwise occupied. One might cynically think want residents feedback.

We do not need bathrooms everywhere. totally against bathrooms at Johnson park. Not enough room and it will attract more homeless people. We already have people sleeping in the park. It also will attract larger gatherings and Johnson park can not accommodate the larger groups. Leave the smaller parks alone!!!!

There is already a very good dog run park next to Shoreline Park. Palo Alto does not need any dog runs.

Who is going to pay for this? IR'A huge wish list for a city that does not even have the common sense to continue to pay for an animal shelter that does serve and help the community.

Report Objectionable Content
Email Town Square Moderator
2 people like this
Posted by Mary Fran
a resident of Los Altos
on Sep 15, 2017 at 3:28 pm

So excited to see the the vision for PA parks includes recognition of the the growth of pickleball - a great sport for any age, low cost and social connection. Thanks!

Report Objectionable Content
Email Town Square Moderator
1 person likes this
Posted by Livability Matters
a resident of Green Acres
on Sep 16, 2017 at 1:22 am

Juana Briones is a stupid place to put a dog park. Residents already turn the school yards into de facto dog parks rather than Briones, for reasons that are obvious if you live there. The plan says densely populated areas, as that one is identified to be, should be prioritized for purchasing space, which should be done there to provide a dog park, and badly needed civic/community space for youth, instead of taking away the only amenity on that side of town (right between all the schools). A City pool on that side of town would be due, for example, since the one at Rinconada is pretty inaccessable now because of the overdevelopment. The City should not be surprised if they press taking away Briones Park and get another uprising, only this time, with residents putting forward initiatives to ensure the City starts investing in its livability. I'm for seceding, it's not like many of us ever go to downtown anymore since it became Palantirville and all the traffic of overdevelopment, and we are tired of being afterthought/hotel dumping ground/never in line for any civic amenities. Since they keep pushing hyperlocal stuff but imposing just the negatives and never providing the positives, that may be the only recourse. Let's be small, compact West Palo Alto, and put a City Hall where we can actually reach it and have representation. Just waiting for that next prod...go ahead, tone deaf City Hall, make our day.,..

'Are they ready for fully innovative Indian food?' Ettan arrives in Palo Alto with chaat, caviar and a secret menu
By Elena Kadvany | 0 comments | 3,645 views

Flying: How to lower your impact
By Sherry Listgarten | 12 comments | 2,598 views