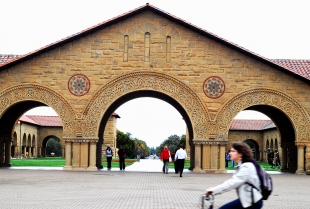 A swastika-like symbol drawn with a 'tar-like or grease-like substance' at Stanford University earlier this month. Weekly file photo.

A swastika-like symbol found outside a Stanford University residence hall earlier this month could be linked to others found on campus late last year, according to the Department of Public Safety.

The graffiti was found outside Lantana Hall within the Gerhard Casper Quad at 661 Escondido Road, public safety officials said.

The vandalism happened sometime during the first five days of the month, which adds "another degree of difficulty to our investigation," public safety Lt. Jon Hernandez said in a press release.

On Wednesday, the residence hall's housing manager reported the symbol to public safety officers, who took pictures of the marking that same day, department officials said.

"At present, we have no witnesses, no video surveillance and no leads," Hernandez said.

The symbol was drawn with a "tar-like or grease-like substance," and no evidence was left behind, he said.

Investigators suspect the same person who drew the symbol earlier this month is linked to 23 other poorly drawn swastikas that appeared on a pillar at the Main Quad, clock tower and other campus areas since late December, department officials said. Other swastika-like symbols were found at nine locations in Palo Alto starting late last year, police said.

No one has been charged for the earlier instances of vandalism at Stanford, according to public safety.

The department will interview the campus community to determine when the vandalism occurred.

In response to the latest incident, Rabbi Jessica Kirschner, executive director of the university's Hillel@Stanford, wrote a letter to the Jewish center's community and supporters.

"While the police do their work to apprehend the perpetrator, we at Hillel are all the more committed to our work in the face of incidents like these," she said.

"In light of incidents like these directed toward Jews and other people, we are bringing renewed energy to building relationships across campus with groups who may share our feelings of vulnerability, and we are committed to a vision of a university community where all members feel secure and at home," Kirschner said.

Anyone with information that can assist in the investigation is asked to call the department's 24-hour hotline at 650-329-2413.

By calling this "graffiti" instead of a possible white supremacist hate crime are the police trying to set expectations on how much resources they are allocating to the investigation?

While there were 23 incidents of swastikas at Stanford there have been, over the past few years, many anti-Semitic remarks to students by other students. These were spoken about at a rally at Stanford last year. Jewish students at Stanford and other colleges and universities feel under threat.

Is this the new America? Anyone black, brown, yellow, red, Jew or Muslim lives with a certain amount of uneasiness, fear?

Sad moment for Stanford. is a registered user.


This is a sad reflection on Stanford, but the university could use this as a teachable moment. I hope they will have the good sense to do so.

Fazsha is a registered user.

Report Objectionable Content
Email Town Square Moderator
18 people like this
Posted by Abitarian
a resident of Downtown North
on Sep 12, 2017 at 1:36 pm

Abitarian is a registered user.

I disagree completely with your comment suggesting we shouldn't be concerned with the appearance of swastikas at Stanford.

Swastikas, or nooses, or other symbols of hate are intended to intimidate specific members of the community because of their color, religion, gender, sexual orientation, etc. There is no place for hate symbols in our community or country.

Hate can often spiral into violence, as we saw recently in Charlottesville where white nationalists carried swastika flags and one sped his car into a crowd of demonstrators, killing a young women.

I believe we should denounce hate whenever and wherever it appears.

Report Objectionable Content
Email Town Square Moderator
10 people like this
Posted by Been Here Before
a resident of Midtown
on Sep 12, 2017 at 1:50 pm

Been Here Before is a registered user.


So the threat of genocide is rearing its ugly head once more..,.

Coronavirus: Plan ahead now for a big outbreak
By Diana Diamond | 22 comments | 4,644 views

The first few seconds after awakening; before I remember the virus
By Chandrama Anderson | 0 comments | 1,837 views

Can you Stay Healthy without Making More Trash?
By Sherry Listgarten | 2 comments | 1,205 views