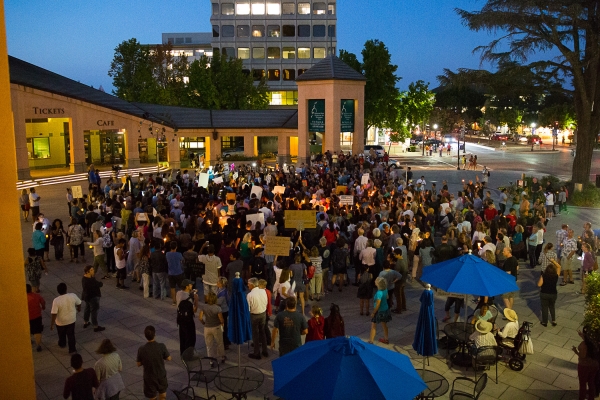 A crowd gathers at the Mountain View Civic Center for a candlelight vigil in support of the Deferred Action for Childhood Arrivals program on Sept. 5, 2017. Photo by Michelle Le. 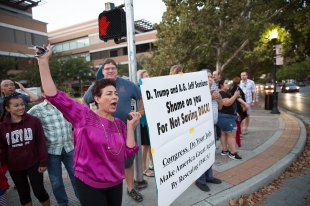 Executive Director for the Day Workers' Center of Mountain View María Marroquín marches to join the vigil to support of the Deferred Action for Childhood Arrivals program in downtown Mountain View on Sept. 5, 2017. Photo by Michelle Le.

At the grassroots level, a candlelight vigil held in downtown Mountain View on Tuesday night drew a peaceful crowd of about 500 people offering testimonials and support for the so-called Dreamers who benefited from the Deferred Action for Childhood Arrivals program, or DACA.

Launched under former President Barack Obama in 2012, DACA provides temporary legal status for immigrants who were brought to the United States as children and have lived in the U.S. for years. Despite support from both sides of the aisle to preserve DACA, Attorney General Jeff Sessions announced that it would be phased out with a "winding down" period, giving Congress a chance to preserve the DACA protections "should it so choose."

In response, Together We Will Palo Alto Mountain View hosted a vigil in downtown Mountain View Tuesday night in solidarity with immigrants who are "being silenced in the face of fear" and could face deportation without DACA protections, according an announcement by the group. The group teamed up with the Services, Immigrant Rights, and Education Network, and the event drew people from all over the Peninsula and San Jose.

A large crowd gathered at the corner of El Camino Real and Castro Street where the vigil began at 7:30 p.m.

The event, which included a march to Mountain View's Civic Center Plaza, included testimonials from young DACA recipients and words of advice from supporters.

"Ending DACA is a heartless and senseless decision that goes against American ideals and basic human decency," he said, pledging to support all students, regardless of immigration status. "We will do all within our power to assist students affected by this decision, and we will advocate tirelessly in Congress for a permanent resolution to this issue."

Attendees tweeted images of other attendees, many of whom held signs and some with American flags. Some of the messages read, "Education not deportation," "Protect our dreamers" and "Immigrants make America great!" Some tweets include videos of people cheering as passing cars honked in support.

Sessions, who referred to DACA recipients as illegal aliens three times, said the Obama-era immigration policy amounted to "unilateral executive amnesty" that denied jobs to hundreds of thousands of Americans and largely dismissed federal immigration laws. He claimed the program also resulted in a surge of unaccompanied minors across the southern border into the country, resulting in "terrible humanitarian consequences."

"Enforcing the law saves lives, protects communities and taxpayers, and prevents human suffering," he said. "Failure to enforce the laws in the past has put our nation at risk of crime, violence and even terrorism."

Almost immediately, Bay Area elected officials slammed the decision. Congresswoman Nancy Pelosi issued a statement calling the decision shameful, cowardly, and a "despicable assault" on innocent young people. Deporting so-called Dreamers, who were brought to the U.S. illegally at a young age, would amount to destroying the lives of hundreds of thousands of patriotic young people and cost the economy billions of dollars, she said.

Congresswoman Anna Eshoo, whose district includes Palo Alto and Mountain View, referred to DACA as a ray of hope for children who are American "in every way except on paper."

At a press conference in Sacramento Tuesday morning, California Secretary of State Alex Padilla said Trump's decision showed "callousness and cowardliness," pointing out that Trump avoided making the announcement personally and "didn't even have the courage to speak to his decision." Padilla said the immigrants who benefit from DACA are not drug dealers or rapists -- referring to the rhetoric used by Trump on the campaign trail last year -- but are students and members of the workforce. Many are business owners, and 16 percent are homeowners.

In a letter to President Trump prior to the announcement Tuesday, Silicon Valley Leadership Group President and CEO Carl Guardino urged Trump to allow DACA to continue, saying that the Bay Area's robust tech economy relies on the program's recipients as a "domestic source of intellectual capital." More than one-quarter of DACA recipients are pursuing post-secondary education, he said, putting them in a good position to join tech companies, from startups to global corporations.

"Immigration has long been a source of strength for America's innovation economy, and DACA recipients contribute to this economic vitality," Guardino said in the letter.

One of the main arguments cited by opponents of DACA is that the program was done without congressional approval, and that the Obama administration subverted the legislative process by enacting the program after House Republicans torpedoed a comprehensive immigration reform bill. Sessions called DACA a legal liability in the announcement, and that it was facing "imminent litigation" from numerous states.

"Ending the previous administration’s disrespect for the legislative process is an important first step," he said.

Data from the Migration Policy Institute found that 24,000 people in Santa Clara County are eligible for at least some protection under DACA, and that 77 percent came from Mexico and Central American countries.

As much as I sympathize with the dreamers; being here illegally breaks the law. What's the point in having laws in the first place if it's okay to break them?

My family immigrated legally. We went through the proper channels; waited in the correct bureaucratic lines; became proud American citizens the correct way along with many families we know. We never took a penny from welfare or took a student loan.

We grew up where money was tight but my parents worked hard.
It is possible. It is a blatant slap in the faces of all the hardworking legal immigrants when illegal immigrants can flounce over without any regard for the law and live as if they have rights that they can just blatantly assume they can have.

I believe in the American dream as much as everyone else; it is possible to do it legally.

@the Truth.. You know nothing about the American dream. Dont speak on subjects that you dont know about. Your family came to this country and i can gurantee they had more money then most immagrents. Next time read up on this subject. These are kids that have temp visa's. No crimanal records. When the visa is up they pay for the renewell. [Portion removed.]

Report Objectionable Content
Email Town Square Moderator
11 people like this
Posted by john_alderman
a resident of Crescent Park
on Sep 5, 2017 at 3:53 pm

Report Objectionable Content
Email Town Square Moderator
4 people like this
Posted by @ John
a resident of Adobe-Meadow
on Sep 5, 2017 at 3:58 pm

Report Objectionable Content
Email Town Square Moderator
13 people like this
Posted by Naturalize
a resident of Another Palo Alto neighborhood
on Sep 5, 2017 at 4:04 pm

They should naturalize and become citizens FAST! They went to US schools, the tests should be a breeze!

That's what my father and his parents did.

Report Objectionable Content
Email Town Square Moderator
9 people like this
Posted by john_alderman
a resident of Crescent Park
on Sep 5, 2017 at 4:27 pm

Report Objectionable Content
Email Town Square Moderator
15 people like this
Posted by john_alderman
a resident of Crescent Park
on Sep 5, 2017 at 4:32 pm

These local restaurants are donating meals to Bay Area residents in need. Here's how to help.
By Elena Kadvany | 6 comments | 10,922 views

Coronavirus: Plan ahead now for a big outbreak
By Diana Diamond | 18 comments | 3,974 views

Will the Coronavirus Save Lives?
By Sherry Listgarten | 29 comments | 3,769 views