A new school year, and a 'new beginning' for Ravenswood Middle School 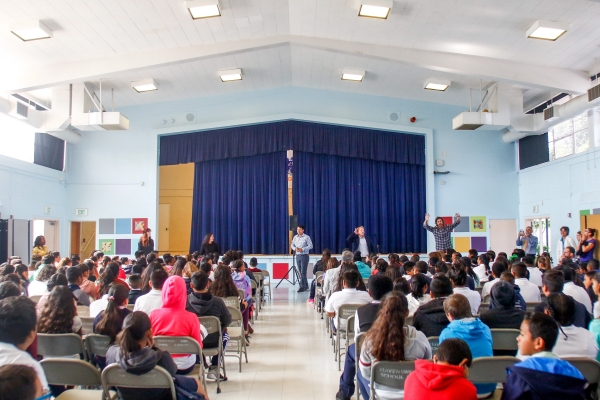 Douglas Garriss, principal of Ravenswood Middle School, center right, is joined by teachers and staff as they welcome the first sixth-grade class and lead them in a chant of "Ravenswood" on the first day of school on Aug. 16, 2017. Photo by Veronica Weber. 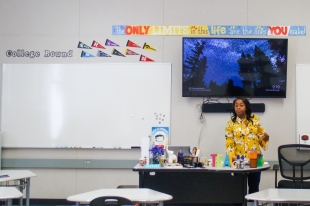 It was not only the first day of middle school for just under 300 sixth-graders at the Ravenswood Middle School in East Palo Alto on Wednesday morning, but also the first-ever day for the district's new standalone middle school.

The students, who come from six different feeder schools in the Ravenswood City School District, spent the first day of school in advisory classes — cohorts they will move through together as a grade — getting to know each other, their teachers and the new school. In many ways, it looked like the first day of school at any middle school; in one room, students sitting in a circle stood up one by one and introduced themselves, sharing what elementary school they went to as well as their favorite movie, sports team or activity.

But Ravenswood Middle School, housed in a wing of Cesar Chavez & Green Oaks Academy on Ralmar Avenue, is an ambitious venture for the Ravenswood school district. Prior to this year, the district taught middle schoolers at six separate sites combined with elementary schools. The goal of the new campus is to reverse an alarming trend that the K-8 model contributed to: Only one in three Ravenswood students leave the district fully prepared to meet the rigors of high school and then graduate ready for college, according to the district.

New administrators described the school on Wednesday as a "startup" and a "new beginning" for the district.

Teachers will model "grit," a "spirit of design" and "rapid iteration" — taking risks and learning from inevitable failures, said Maurice Ghysels, a former Menlo Park City School District superintendent who has been brought on to serve as chief innovations officer for the Ravenswood Middle School.

But the school's ultimate goal, Principal Douglas Garriss said, is to level the playing field for students who have historically started high school already behind many of their peers. The new middle school offers a range of electives, from a makerspace to orchestra band, and is working to expose students early on to diverse opportunities. During a five-week summer transition program this summer, the school took 65 rising sixth-graders on field trips to the Pescadero State Beach to visit the Marine Science Institute program, to see a production of "The Hunchback of Notre Dame" in San Jose and to visit a local college, among other trips. They also had guitar lessons, yoga, art, physical education, science and math instruction.

"We want them to have exposure to band and makerspace and all of those things so when they get to M-A (Menlo-Atherton High School), they go in at the same playing field with the other kids," Garriss told the Weekly Wednesday. "That's why we went to this model."

The new school is fully staffed for this year, Garriss said, with 25 teachers and staff, including a school counselor, school psychologist and two mental-health counselors from nonprofit Counseling and Support Services for Youth Bay Area. All but one staff member were internal hires from the Ravenswood school district. Several teachers also grew up in East Palo Alto themselves.

More will be hired as the school grows over the next two years from one sixth-grade class to a full middle school. The school will eventually take over the entire Ralmar Avenue campus, including space currently occupied by the Los Robles Magnet Academy. (Los Robles will move to Ronald McNair Academy, and McNair, a middle school on Pulgas Avenue, will have been consolidated into the new middle school by then.)

Despite most teachers' enthusiasm for the new school, its development was not without some controversy. A letter this spring announcing the teachers union took a "vote of no confidence" in Superintendent Gloria Hernandez-Goff described what they saw as a flawed process that failed to fully include the teacher's voice.

When asked to respond to these criticisms, Ghysels said the district has moved forward.

"That was then," he said. "What I see now is just a lot of enthusiasm for getting it right, evidenced by (the fact that) we got all together and delivered."

The Ravenswood Middle School was designed purposefully with the population it serves in mind. With a large number of English-learner students for example, the schedule includes time for two elective periods, so students in need of dedicated English support still have another period to sign up for an elective, Garriss said.

The Ravenswood Middle School also has an Advancement Via Individual Determination (AVID) college-readiness program and is espousing a "college-going culture," administrators said. Signs posted outside each classroom door note not only the teachers' names but the colleges they attended.

Garriss, who started in the district as a seventh-grade teacher, most recently oversaw Ravenswood's English-language acquisition, English-language development and AVID programs for sixth- through eighth-graders.

There are no separate special-education classes at the Ravenswood Middle School — students with special needs are "completely integrated" into all of the mainstream classrooms, Kazemi said.

Throughout Wednesday morning, the school worked to emphasize concepts like perseverance, resilience, leadership and community with students.

In an all-school assembly, Garriss reminded students to embrace failure and to learn from their mistakes, to strive to be their best rather than be perfect and to be "leaders" in setting the culture of the new school.

"You have all of those choices that are right here in front of you, right now," he said.

1 person likes this
Posted by Resident
a resident of Another Palo Alto neighborhood
on Aug 17, 2017 at 2:23 pm

This is a great step in the right direction for EPA. I wish them success in this endeavor and good luck to the students.

This new middle school sounds so promising, but the article states:

"Only one in three Ravenswood students leave the district fully prepared to meet the rigors of high school."

"But the school's ultimate goal, [...], is to level the playing field for students who have historically started high school already behind many of their peers."

"Throughout Wednesday morning, the school worked to emphasize concepts like perseverance, resilience, leadership and community with students."


There needs to be some accountability on the parents for students not being prepared! Teachers can only do so much. If students aren't getting support, guidance, and supervision at home, the EPA population will continue to consistently be below nearby schools. There needs to be buy-in from the parents and they need to do their part. Almost all articles and reports about this district focus on teachers, test scores, the administrators, or curriculum. Why is there never any mention of the parents' responsibility?

Why doesn't the district partner with parents? Why does no one bring up that the majority of parents in EPA are unable to provide support and tutoring for their children?

It's like rather than the district calling out parents and putting some accountability on them, the district would rather spend millions on a new school and resources in hopes that that will finally get these kids to be their best.

Children need academic support both at school and at home. If they only get guidance and support at school, they will continue to fall behind. These children will one day attend M-A with students from Palo Alto, Atherton, and Menlo Park where students from there have an advantage.

In three years when this new middle school has students in all three grade levels and its first class will graduate, it will be absolutely wonderful if this school did make a difference and those outgoing 8th graders are ready for high school. Only time will tell if this new idea is successful.

These local restaurants are donating meals to Bay Area residents in need. Here's how to help.
By Elena Kadvany | 6 comments | 11,394 views

Coronavirus: Plan ahead now for a big outbreak
By Diana Diamond | 20 comments | 4,326 views

Will the Coronavirus Save Lives?
By Sherry Listgarten | 29 comments | 4,023 views

The first few seconds after awakening; before I remember the virus
By Chandrama Anderson | 0 comments | 1,176 views