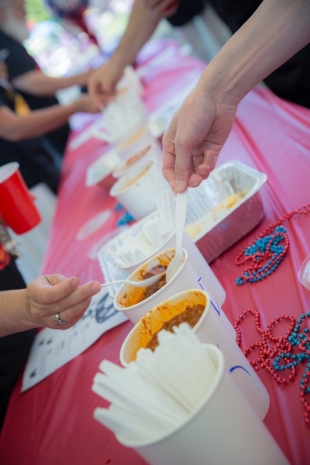 Palo Alto will hold its annual Chili Cookoff July 4 in Mitchell Park. Image courtesy of the City of Palo Alto.

Like this comment
Posted by A 50+ Year Fourth of July Tradition Right Here In Palo Alto
a resident of Greenmeadow
on Jul 3, 2017 at 11:49 am

Don't forget the Greenmeadow neighborhood's annual Fourth of July Parade. Hundreds of residents turn out to view floats created by local families. Enjoy our lively band, see Uncle Sam on stilts, cheer for Greenmeadow's drill team and color guard, and much more. This is old-fashioned Fourth fun with races, a picnic, field games and much more--A tradition for more than 50 years! This year's theme is Wonders of the World! Join us in song at Greenmeadow Park at the end of the parade. Kick off Fourth of July by singing in celebration with hundreds of friends and neighbors. (Every year it moves me to tears.)

You can go to the Chili Cook-off afterward, it is walking distance away--but that's just another party. Greenmeadow's parade is what the Fourth is really about, and it is a heart-warming way to kick-off your day--coming together in community celebrating freedom and independence. In these times, what could be more uplifting? Come see the parade which is free and open to the public. It starts at 11:00am at 303 Parkside Drive.

Please Apply So We Can Reject You!
By John Raftrey and Lori McCormick | 6 comments | 2,706 views