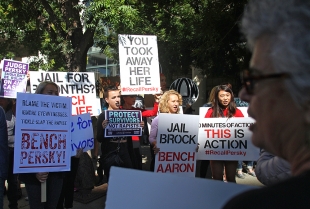 Brock Turner, now 21, a Stanford dropout and a registered sex offender, served three months at Santa Clara County's Main Jail in San Jose last year after a jury convicted him of assault with intent to commit rape, sexual penetration of an intoxicated person with a foreign object -- namely, his finger -- and sexual penetration of an unconscious person with a foreign object.

"Turner lied in court and never expressed remorse," the notice of intent, filed Monday morning at the Registrar of Voters in San Jose, reads. "Santa Clara County residents deserve a judge who will protect victims, not rapists."

The assault took place on the ground outside a fraternity party after midnight on Jan. 18, 2015, before two Swedish graduate students who saw Turner on top of the unconscious woman intervened.

Once county officials approve the petition, campaigners have 160 days to collect 58,634 signatures in order to qualify for the June 2018 county ballot.

"Violence against women is a voting issue. We are going to vote 'no' on rape culture," Dauber said Monday. "We aren't going to stop with the recall of Aaron Persky."

"Recalling a longtime respected judge and former prosecutor over a single decision in which he followed the Santa Clara County Probation Department's recommendation sets a dangerous precedent that should concern us all," the statement reads. "Every judge has made an unpopular decision; judicial recalls are an extreme step that should be reserved for actual misconduct."

The recall campaign decided recently decided to postpone the recall until next summer given the cost of mounting a special election this November.

The recall would be the first recall of a judge in Santa Clara County, Dauber said. Both prior successful judicial recalls in California, in 1913 in San Francisco and 1932 in Los Angeles, have involved bias.

Dauber compared the Recall Persky Campaign to the 1913 recall of San Francisco Police Court Judge Charles Weller, who had reduced bail for a man charged with felony assault of a 16-year-old girl.

Women's clubs, whose members had won the right to vote in California in 1911, led the charge on Weller's recall.

Opponents of the recall effort include retired California Superior Court Judge and former San Jose Independent Police Auditor LaDoris Cordell, who has spoken out about the impact of mandatory sentencing on perpetuating the mass incarceration of people of color and the poor.

The notice of intent lists three prior cases in which Persky has given lenient sentences for violence against women to college athletes and a Silicon Valley engineer, and to a man convicted on a child pornography felony charge.

"This happens repeatedly throughout this county," said Kathy Spillar, executive director of the Feminist Majority Foundation.

District Attorney Jeff Rosen filed a motion to have Persky removed from another sexual assault case after the Turner decision. Persky has since been transferred to civil court at his own request.

The recall effort reflects "unsettling times when judges are more and more frequently coming under political attack," the statement from Persky's campaign reads. The statement points to three independent organizations, including the California Commission of Judicial Independence, that say Persky did not exhibit judicial bias.

A Pragmatic Approach to A Trillion Trees
By Sherry Listgarten | 4 comments | 4,063 views

Singapore's oldest cafe was about to open in Palo Alto. Then, the coronavirus hit.
By Elena Kadvany | 1 comment | 3,341 views

Repairing a Disagreement with your Beloved & “Physical” vs. “Social” Distancing
By Chandrama Anderson | 2 comments | 2,739 views

The University of California’s flexible policies during COVID-19
By John Raftrey and Lori McCormick | 6 comments | 2,672 views