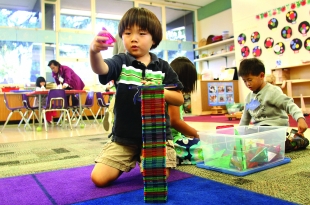 Leo Sawada, center, adds a piece to a tower he is building while Remina Fujita, right, and Luke Lew, far right, play with more blocks in their Young Fives and Transitional Kindergarten class at Greendell School in 2012. File photo by Veronica Weber.

Shannon Coleman, a preschool teacher who has worked at Palo Alto Unified's Greendell School since 2012, has been promoted to principal of the district's early childhood education campus.

Greendell School houses the district's Young Fives and PreSchool Family programs, the former for children who are age-eligible but not yet ready to enter kindergarten and the latter a parent-education initiative for families with children ages 0 to 5 years old.

Before joining the district, she worked at Abilities United, a Palo Alto nonprofit that advocates and provides resources for people with developmental disabilities, for a year as a preschool teacher, early intervention developmental specialist and "social skills" instructor, according to the district announcement.

Coleman holds a bachelor's degree in anthropology from the University of California at Berkeley and a master's degree in early childhood special education from San Jose State University.

The district hired Yoshinaga at the end of the 2015-16 school year to replace longtime educator and Greendell principal Sharon Keplinger. At Ohlone, Yoshinaga is taking over for Nicki Smith, who announced her retirement in April.

As a former Pre-School Family Parent, Teacher, mentor and All Around Champion of this, innovative and adaptable program solidly based on sound child development principles, I am thrilled to learn that an "in house" member of the program will once again be taking over. That's definitely as it should be in my opinion - nothing can prepare one quite as well as having been involved in different dimensions over the years to absorb the subtle strength, caring and uniqueness of parents and children during the Pre School years.
Founded by Besse Bolton over 60 (70?) years ago when she saw a need for Pre School Education that included parent participation and family involvement; carried on ably by Betty Rogaway, Eleanora Jadwin and Sharon Keplinger - all of whom were former parents and teachers in the program. Having been retired now for many years I have had little contact except for the life long friends I made there, but I will never forget the positive impact and sense of pride it brought to my life and my view of children as the hope of the world. I wish Dawn Yoshinaga great success in her new position, and I especially wish Shannon Coleman all the joys and challenges that PSF is sure to bring her!

Posted by Name hidden
a resident of Esther Clark Park

The first few seconds after awakening; before I remember the virus
By Chandrama Anderson | 0 comments | 2,223 views

Can you Stay Healthy without Making More Trash?
By Sherry Listgarten | 3 comments | 1,543 views

Think about helping others in our coronavirus-affected area
By Diana Diamond | 2 comments | 1,094 views