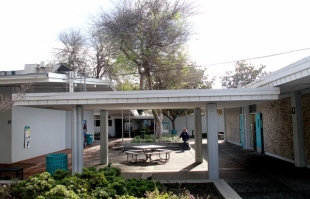 Cubberly is an extremely useful piece of land/facility that caters to many people in various ways. If/when addressing what to do with it in the long run, I believe we need to consider what the general public has in mind. People that live in the nearby area/district and those that use/have used the land/facilities should have emphasis put on their opinions.

Personally, I started off playing basketball in a league at the Cubberly gym when I was in 1st grade, I have gone to other extracurricular classes/events at this facility, I have come here for Friends of the Palo Alto Library Sales, My sister took dance classes here, I took Foothill extension classes here, and I visited the Mitchell park library here while they were under construction.

Cubberly is a wonderful resource that not everyone knows about, but should definitely look into further before casting negative opinions.

I for one, do not want an extremely ugly and monotonous "contemporary" style building built here that takes away from the older, homey feeling culture that this town once embodied.

Flying: How to lower your impact
By Sherry Listgarten | 8 comments | 1,889 views