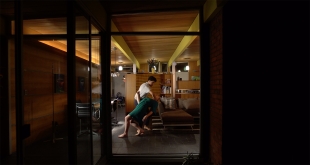 Dancers Angel Acuna and Chelsea Zeffiro perform in the background during a party in the Eichler home of Anne Deierlein as part of the "California Living Project II: Palo Alto," a collaborative art collaboration with Greenmeadow neighborhood residents, which is debuting June 10. Photo courtesy Nate Page.

Looking forward to Part II, where they film from the vantage point of ADU's peering into neighbor's yards.

Cool project! Looking forward to it.

I love my Greenmeadow neighborhood! All this while we launch a neighborhood food trucks dinner gathering, celebrate our annual neighborhood college scholarship award winners (15 deserving local and Menlo Atherton students), kick-off another year of swim team fun, AND plan a rockin' July 4 parade and picnic with field games.

It takes a village...and what a village we have!