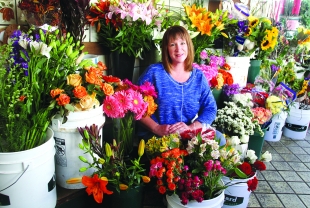 Now more than ever with the new supermarket We need crossing lights on College & El Camino.
The amount of traffic both vehicular and by foot the new market and offices will create is huge.
Terribly unsafe corner to cross from the South side of College as is.
The city must do something about the danger to pedestrians.

Mrs. Stapleton was often a rude, grumpy lady, but she had the highest quality flowers at reasonable rates so I always bought from her. Michaela was always frazzled, although very sweet and nice. Perhaps the claustrophobic square footage of the store wasn't ideal. She kept up the creativity, quality, and prices of Ms. Stapleton. Sorry to see this store close, as it was part of my life for over 30 years. No florist in Palo Alto can compete with them.

I loved Stapleton's Florist. Mrs. Stapleton was always kind to me and her husband was sweet. She hired a lot of Paly students, including two of my siblings. Whenever I was invited to dinner and brought flowers as a thank you gift, I always purchased them from Stapleton's. I hate seeing the shops I grew up with disappear. Palo Alto is loosing its charm and character.

Can you Pay to Reduce your Carbon Footprint?
By Sherry Listgarten | 3 comments | 1,417 views