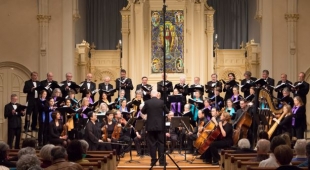 Inspired by the 400th anniversary of William Shakespeare's death, Sanford Dole, artistic director of the Bay Choral Guild, has created a spring program that celebrates four centuries of choral music. The group will perform Dole's compilation of music inspired by Shakespeare's work in Palo Alto on June 3.

"I had been thinking about this theme for a while, but when the 400th anniversary came up, the timing just seemed right," Dole said. "It felt like a good idea to use Shakespeare as the hook of the program."

Founded in 1979, the Bay Choral Guild is a 40-person ensemble based in Palo Alto, composed of a diverse group of members.

"Music and math go together well, so a lot of people who work in the tech world also perform in various musical organizations," Dole said.

The guild's song selections are also diverse, incorporating styles from baroque to modern. As the artistic director, Dole is responsible for choosing the upcoming season's programming and arranging it for the group. He did a lot of research to arrange an entire concert for a choir after discovering that most songs from Shakespeare's time were arranged as solos.

"My goal was to create a musical survey that catalogued musical styles and techniques as they evolved from one era to the next," Dole explained in the program notes for "400 Years of Shakespeare." "Sadly, although there are plenty of song lyrics found in his plays, I was unable to find any true choral music, in the sense that we think of it today, from his days in the 17th century."

The group will perform the pieces in chronological order, highlighting musical changes across the four centuries. This method of organization is intended to help focus the audience's ears on a particular musical style (a preview lecture will be held 30 minutes before the concert for those interested in gaining a bit more background information).

The program begins in the 1700s with the work of three composers. Thomas Arne, the most famous of the three, wrote "Rule Britannia" as well as the British national anthem. His solo song "Blow, blow, thou winter wind" has been arranged by Dole for the lower voices of the choir. The two other 18th-century English composers included in the concert are Benjamin Cooke and Samuel Webbe.

Moving on to the 19th century, Dole has included a piece from editor, critic, adjudicator and composer David Emlyn Evans that sets the scene for the opening monologue of Act V of "Merchant of Venice." Deemed the most-well known piece of the concert by Dole, "Three Shakespeare Songs" by English composer Ralph Vaughan Williams will represent the 20th century.

The second half of the concert covers the 21st century. This section includes an English composer and Oakland resident, Paul Crabtree. His music style combines popular culture and art music, Dole said. The program also features rising stars such as Dominic DiOrio, to highlight the significant change in sound since the 18th century.

"It is truly fascinating to see the progression of how the pieces change over time," Mary Holzer, a singer and publicity chair of the group, said of how the same text is interpreted differently by different composers. "The progression is a very cool aspect of the concert that I hadn't expected."

Editorial Intern Sophie Pollock can be emailed at spollock@paweekly.com

A Pragmatic Approach to A Trillion Trees
By Sherry Listgarten | 1 comment | 3,062 views

Repairing a Disagreement with your Beloved & “Physical” vs. “Social” Distancing
By Chandrama Anderson | 1 comment | 1,805 views