For Buena Vista residents, joy, relief and a new beginning

Residents rejoice after their homes are saved in $40.4 million deal 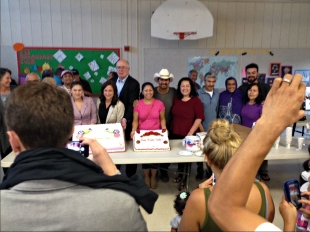 Residents of Buena Vista Mobile Home Park gathered in the multipurpose room at Barron Park Elementary School on Thursday evening, much as they have during the past 4.5 years, to learn about their fate, but the mood was much different than in meetings past.

This time, the worried expressions and thick tension in the room were replaced by something the low-income mobile home community thought they might never experience: relief.

Erika Escalante, president of the Buena Vista Park Residents Association, happily informed the roomful of residents that their beloved park had been saved. The idea was so new that the residents seemed to have barely registered the words. In fact, many were already trying to process information they had heard just five hours ago.

Mothers and fathers, some with children too young to understand how close they came to losing their homes, and grandmothers and grandfathers clapped and cheered. The Housing Authority of the County of Santa Clara had brokered an agreement to purchase the aged mobile home park from the property owners, the Jisser family, for $40.4 million dollars, the agency and Santa Clara County Supervisor Joe Simitian announced earlier that day.

Residents cheered for Simitian and gifted him with a commemorative "Save Our Homes" T-shirt, one of hundreds they wore to public meetings and during street-corner demonstrations. Simitian smiled, savoring the moment he has worked hard for in these last years.

"How proud I have been to work with you all in the past 2.5 years. You have carried yourselves with dignity and determination and grit, and this is the end result of your hard work. I want every one of you to sleep well tonight knowing that when you wake up tomorrow you won't have to worry about an eviction notice," he said.

Roberto Munoz, a longtime residents' association board member, said that it was hard in the beginning to imagine they might ever save Buena Vista.

"The owner had a good lawyer," he said.

Mayra Escalante, holding her 20-month-old daughter Alexa, said that she had attended Jane Lathrop Stanford Middle School and Gunn High School, and she was happy her children can now do the same. Living in Buena Vista, the last affordable place for low-income residents, allowed her to pass that dream on to her own children. It's a dream that would have been lost if she had to move away, she said.

"My parents, sister and my cousin live in the mobile home park. It's such a beautiful community; we are very happy to live here," she added.

Maria Martinez, board secretary, said that as a board member she knew the agreement had been reached a couple of days ago, but she did not mention it to anyone until the formal announcement at 2:30 p.m. on Thursday, which came from Simitian's office.

"I couldn't hold my happiness," she said.

Three generations of her family -- 12 people -- live at the mobile home park. That's the situation for many residents at Buena Vista, and the reason they wanted to stay together. And it is what makes Buena Vista a special place, she said.

"Compared to the rest of the Palo Alto community, we know almost everybody," she said.

Some Palo Altans have argued the price tag for the aged park, which will need many infrastructure improvements, could be steep. But residents said the fight to save the park -- and its cost -- is worth it.

In a city with few housing options for middle- and low-income residents -- many of whom are also often Palo Alto's service workers -- saving Buena Vista makes a small but significant contribution toward housing options the city desperately needs.

Beyond the arguments over whether Buena Vista's residents "deserve" to live in Palo Alto if they can't afford the market-rate prices, there is something more. A community isn't really a healthy community if it doesn't value all of its contributors, they said. The purchase of Buena Vista may prove that many Palo Altans have a will to include even its less-affluent members, and that will benefit all residents, they said.

"It's a win-win for the whole city. They get their low-income housing and we stay as contributing members of this community," Melody Cheney, a board member and longtime resident, said.

Cheney said she hopes that other cities will consider taking a creative approach to creating and preserving housing beyond high-priced units for tech workers. And she is hopeful that saving Buena Vista will lead to creating more livable spaces for lower-income residents.

"Someone is going to start where I started 17 years ago, having a piece of the American dream."

This is quite a bit of spin that glosses over the fact that a good family was being held hostage by this group of people, their lawyers and a handful of power players in the city.

It isn't a "win-win" situation when a family was held hostage by tenants, lawyers and local politicians. The Buena Vista trailer park should have closed several years ago.

How is this a win win. If we had spent the money to build affordable housing for a much larger number of people on that land I understand. So much money spent, unfairness to the landowners and a select few who unduly benefited. This article is not even a piece of journalism. It's like one of the Beuna Vista people wrote it. Ugh, the joys of living in Palo Alto where the powers that be have no respect for hard-earned tax dollars.

Report Objectionable Content
Email Town Square Moderator
9 people like this
Posted by Palo Alto Native
a resident of Another Palo Alto neighborhood
on May 19, 2017 at 11:07 pm

The first few seconds after awakening; before I remember the virus
By Chandrama Anderson | 0 comments | 2,314 views

Can you Stay Healthy without Making More Trash?
By Sherry Listgarten | 2 comments | 1,619 views

Think about helping others in our coronavirus-affected area
By Diana Diamond | 2 comments | 1,156 views