Cracks in the ceiling 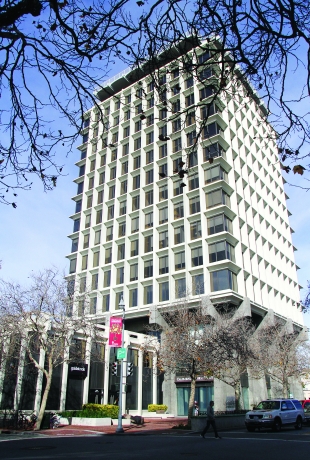 The building at 525 University Ave. towers over the street in downtown Palo Alto. Photo by Veronica Weber.

• View all sections of this cover story with photos here.

For 40 years, almost all new buildings in Palo Alto had to be shorter than 50 feet in height.

The invisible ceiling remains intact to this day and, much like in the past, it has its ardent supporters and detractors. For "residentialists," who favor slow city growth, it's a bedrock protection against the "Manhattanization" of their fair city. Even the City Council's most pro-growth members — Cory Wolbach and Adrian Fine — have been cautious about slaying this political sacred cow. Both have said in the past that they support maintaining the limit, even though Fine had once called it "arbitrary."

The current Comprehensive Plan doesn't have a formal policy on height limits, but it notes that the established 50-foot threshold "has been respected in all new development since it was adopted in the 1970s."

"Only a few exceptions have been granted for architectural enhancements or seismic safety retrofits to noncomplying building," the Comprehensive Plan states.

But for city growth advocates, architects and developers, that's not exactly a good thing. For them, the height limit, which is codified in a city ordinance, is an arbitrary barrier that exacerbates the city's housing crunch and prevents quality building design. Randy Popp, a former chair of the city's Architectural Review Board, has argued on many occasions that allowing a few extra feet would free architects to design more attractive four-story buildings. And Charles "Chop" Keenan, one of the city's most prominent developers, urged the council in an April letter to focus less on height and more on the number of stories, particularly when retail is planned for the ground floor. (Retail space typically demands a 15-foot ceiling, he said.)

"Four stories in 50 feet can be done, but having 65 feet would be a much better building," Keenan wrote.

The council continues to voice support for the 50-foot height limit, which remains politically popular. But even after praising it, they took a vote in January that opened the door to changing — or abolishing — the restriction. The updated Comprehensive Plan, they decided, will have no mention of the height limit.

Vice Mayor Liz Kniss, who proposed editing out the height limit, acknowledged at the council's Jan. 30 meeting that the rule has worked well over the years. She then argued that, rather than being embedded in the document, the policy should be kept on as a regular ordinance, subject to the whims of the present and future councils.

"It worked well," Kniss said of the height limit. "If it continues as an ordinance, we'll have flexibility with it."

Some council members took issue with her logic. Karen Holman and Lydia Kou took the opposite view and said the height limit should be included in the Comprehensive Plan. Tom DuBois joined them in dissent.

"If our policy is to retain the 50-foot height limit, then it belongs in the Comprehensive Plan," Holman said.

But on this issue, like on most others, those favoring more city growth carried the day. Councilman Eric Filseth, who typically sides with the "residentialist" camp, joined the council majority in voting 6-3 to remove the height restriction from the Comprehensive Plan.

"I'm certainly not prepared to repeal and replace it tonight, but at the same time we shouldn't ban it outright," Filseth said. "We don't know what our needs will be 10 or 15 years from now."

The council's Jan. 30 vote doesn't mean that the city's 50-foot height limit will become completely irrelevant with the Plan's adoption. It does, however, suggest that the council will be more lenient about breaking the limit for projects that offer coveted amenities like affordable housing and ground-floor retail. The fact that three of the six city-growth scenarios being analyzed as part of the Comprehensive Plan update include what staff calls "modest exceptions" to the height limit for such projects further underscores the ceiling's crumbling foundation.

Even so, the council took pains at the January meeting not to go too far on the issue. Members opted not to include any policies explicitly allowing greater heights. Mayor Greg Scharff, like his colleagues, observed that the community generally likes the restriction, with not too many people saying that it needs to be raised.

That sentiment, however, is starting to change, as evidenced by the crowds of people attending meetings over the past two years to urge the council to "go big" on housing. Leaving the height limit out of the land-use document, Scharff argued, will allow this debate to continue.

"We're not trying to change (the height limit), but we're leaving the door open for that conversation in the future," Scharff said.

• This article is part of a cover story on the Comprehensive Plan coming into focus. Find out what else the council is looking to change in the areas of development, housing, transportation and business.

Max FAR can remain unchanged while increasing the height limit. The result will be much more interesting architecture, greater setbacks, more space for landscaping and general interest instead of the existing zoning that forces 50' boxes.

" The result will be much more interesting architecture, greater setbacks, more space for landscaping and general interest... ."

Then why don't we see these salubrious trends in our existing buildings of various heights? Hmmm?

Nice try, but you're only fooling people who want to be fooled.

These local restaurants are donating meals to Bay Area residents in need. Here's how to help.
By Elena Kadvany | 6 comments | 11,342 views

Coronavirus: Plan ahead now for a big outbreak
By Diana Diamond | 19 comments | 4,282 views

Will the Coronavirus Save Lives?
By Sherry Listgarten | 29 comments | 4,006 views

The first few seconds after awakening; before I remember the virus
By Chandrama Anderson | 0 comments | 1,136 views