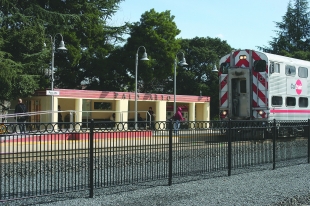 City officials are looking for public feedback on the future of rail design that will include discussions on Caltrain's electrification project that would pave the way for high-speed trains to run through Palo Alto. Weekly file photo.

I've been on this wheel before. Go back to 2009: Somewhere in the archives of the Planning Department are the results of a design charrette that had about 18 high-powered speakers, including reps from CalTrain, Hatch Mott MacDonald (the tunneling specialists), a professor of transportation from UC Berkeley, etc.

I think it is appropriate that the city hold these workshops, but I wish they would dig up the old results, too.

Won't it be 2047 before we see $700 million from Measure B ??
Or do we get cash up front to be repaid by supposed sales tax?
I expect two or three recessions before then.

Report Objectionable Content
Email Town Square Moderator
Like this comment
Posted by Not really that complex of a problem, except for the cost
a resident of Downtown North
on May 11, 2017 at 11:31 pm

As writer number two mentioned - we had a huge discussion of this maybe a decade ago and nothing happened. There is no reason to spend countless hours and dollars repeating the same studies. The tracks have not moved and the options are still basically the same.

That is also the issue. Why does it take so long to discuss really three basic options. Raise the trains, leave them at ground level or put them in a trench or hole.

Personally I don't want them raised because it is ugly and noisy. Leaving them at ground level can be dangerous and also if the numbers of trains increase as projected wait times at crossing will be much worse. So for me a trench makes sense.

A trench is expensive but this will be around for many decades and worth it. Also the area surrounding the trench can be made into a city long park with a bike path all the way down the length of the track and many more pedestrian crossings where we only have a few now. Tunnels I believe are way too expensive and would allow developers to come in and try to build on top of the train area. We don't need high rise buildings blocking this area, we need open space.

The trench option, as I understand it, would not allow buildings to be built on top so it wins for my vote since it opens up the area for park space and bikes and pedestrians and keeps the trains low and quiet and keeps people safe from getting hurt by them and decreases interference with cars even if the trains run more often. Seems like the best of the three.

"Leaving them at ground level can be dangerous"

Tracks are at ground level for University, Embarcadero and Oregon. Dangerous?

The city did actually track down the videos from 2009 - these are a great resource, as is the Mid Pen Media Center which did the original taping.

Report Objectionable Content
Email Town Square Moderator
1 person likes this
Posted by Juan
a resident of Mountain View
on May 12, 2017 at 11:17 am

Trench / tunnel is the only viable solution. Move the tracks (and possibly stations) underground and build parks / bike / pedestrian trail on top.

SF has numerous underground BART stations. Why can't Caltrain stations be underground? Underground all the way from Mountain View to SF.

Caltrain electrification is really HSR electrification in disguise. To make HSR's "blended" approach work, the ROW must be electrified. The prospect of electrifying Caltrain was offered as a political bagatelle, i.e. bait to get peninsula communities to support it.

Under the trench plan, the tracks would come up to grade south of Matadero creek. Oregon, Embarcadero and University are already grade separated.

Elevating the tracks is not a good idea in earthquake-prone California. The structure would be top-heavy and you would risk a Caltrain full of passengers or a heavy freight train plunging 15 feet to the ground during an earthquake.

Don't forget -- the ROW through Palo Alto is not owned by CPA. It is owned by JPB (Joint Powers Board, IOW Caltrain).

Report Objectionable Content
Email Town Square Moderator
3 people like this
Posted by HSR amnesia
a resident of Community Center
on May 13, 2017 at 3:59 pm

We met with HSR charlatans at Mitchell park a number of years ago when they lied to us about the original design:

"all options are on the table" (they weren't)

"Tell us how you would like the HSR to go through your town."


My answer then is the same as now: Silent and Invisibly.

This is a residential community, big, loud and fast is not going to work. Put it underground. That was our request then, that is our request now. If you cannot afford to put it underground, just raise the fares. No fair jamming this into our community in order to benefit others riding through. They create a public nuisance, they should pay to fix it.

Put it underground. To do otherwise is just property value theft from Palo Alto citizens to the riders, owners, and political hacks benefiting from HSR.

At some point I saw a comment from a geologist about how tunneling around here would be a VERY expensive proposition because of the ground structure here. As in billions. If PA has four miles of track to deal with at $1B/mile I'd vote against.

Report Objectionable Content
Email Town Square Moderator
4 people like this
Posted by Easily Wiser than NIMBYs
a resident of another community
on Jun 5, 2017 at 10:45 am

Palo Alto has had decades to work on grade separation with the railroad, and failed, tragically for many who have died as well as laughably for its reputation. Time after time fools still demand the tracks and trains be put into a tunnel, or into a trench (depressed right-of-way) with or without covering, despite having never made it clear that they will pay for such a luxury. They haven't even done homework to determine if this is even possible with the water table where it is there, or if that would impose excessive gradients on the rest of the railroad (which doesn't have to be changed to meet childish demands of a few NIMBYs in one notorious little town). A slightly raised railroad and somewhat depressed underpass scheme for roads and trails to cross the railroad in fully grade-separated form already exists in San Carlos and is a model for the other cities. The foolish, ridiculous, annoying-as-hell activists in Palo Alto need to GROW UP.