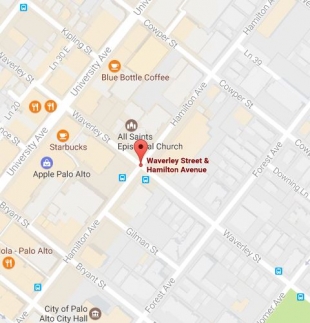 City officials are planning to build a new parking garage in downtown Palo Alto, where staff will look into adding a mechanical lift, which is lacking for an upcoming garage near California Avenue. Photo courtesy Google Maps.

The city and its residents should NOT pay for a parking structure downtown. This problem was caused by developers allowed to build structures without adequate parking and by businesses locating in our city without any regard for parking or housing for employees. The developers and large employers should pay for parking. Unfortunately we have no way of also making the City Council members who allowed this to happen pay except at the ballot box or through shaming or recall.

Residents are NOT paying for the new garage. The bulk of the money is coming from the increased hotel tax (the TOT) and, in prior years, from parking assessment dollars where businesses and property owners "tax" themselves through paying back a City bond.

In 2002, the City issued a second series of bonds in the amount of $35,460,000 to finance the construction and completion of Garages R and S/L. The garages were built to accommodate growing demand for parking in the downtown area and to promote the City’s ability to manage public and residential parking. In addition, the new garages were built to ensure the vibrancy and economic vitality of the downtown.

A large part of the office parking problem is that there appears to be no fire/safety code to limit the number of employees tech companies want to cram into their offices. The Planning Department formula for new build is 250 sq ft per employee, which has been wildly outdated for at least 15 years. Also, I heard the developer sympathetic city manager tell the council a few years ago there is no data to support increased employee counts.

Even without a single new office building, the turnover of old leases to new tech companies results in a continued increase in the number of tech employees in around University Avenue and California Avenue where parking is such a problem. Even if 50% of their employees take the train, ride company buses to San Francisco, use rideshare, Uber or Lyft, or can afford to live near enough to walk of bike, there is still going to be an ever increasing number of employees driving into Palo Alto. And Uber and Lyft don't solve the traffic congestion problem as they are back and forth on the road all day.

Unfortunately, lack of parking disproportionally affects the traditional small businesses that benefit the public. The landlords who complain that lack of public parking is a deterrent for some companies they would like to lease to which may affect their profit margin is not the city's problem.

@Worker Bee, residents are certainly paying for the new garages many forms: parking metering fees, congestion, parking permits fees, gridlock, loss of personal freedoms, neighbors adding ADUs, loss of retail and medical professionals who are pushed out, small start-ups being pushed out, extra time needed to get anywhere, more govt workers to plan these programs and lots of quality-of-life ways -- all so big companies can flood our streets and neighborhoods and dominate govt. committees while cramming in more and more cube dwellers.

Small startups that made this valley great, not billion-dollar companies like Visa, American Express and Palantir.

Report Objectionable Content
Email Town Square Moderator
10 people like this
Posted by margaret heath
a resident of College Terrace
on Apr 7, 2017 at 4:00 pm

Report Objectionable Content
Email Town Square Moderator
8 people like this
Posted by impacts growing
a resident of Another Palo Alto neighborhood
on Apr 8, 2017 at 10:50 am

Underparked buildings like 611 Cowper and 524 Hamilton are outside the Downtown parking assessment district (I'm still trying to figure out what Epiphany Hotel paid in assessments to the parking district). Disastrous, reckless office development policies have put the City in a box and the impacts keep growing. Somebody should ask Kniss
if she herself has ever used a parking lift and how
it is working out at 537 Hamilton before advocating
lifts for the new Downtown garage.

You'll hear that the 537 Hamilton example is not applicable.

Report Objectionable Content
Email Town Square Moderator
11 people like this
Posted by Allen Akin
a resident of Professorville
on Apr 8, 2017 at 1:38 pm

I live on Waverley. Currently about 5100 cars pass my house every day. It's been increasing at about 10%/year since 2013. One effect of this project will be to add several hundred more trips each day on Waverley, because that's the site of the garage and the least-resistance path in downtown between Embarcadero and University. It would be nice to see some effort to mitigate the traffic increase, but I'm sure we'll learn that this project isn't subject to CEQA review because it obviously has no environmental impact.

Report Objectionable Content
Email Town Square Moderator
4 people like this
Posted by Rational
a resident of Downtown North
on Apr 8, 2017 at 3:47 pm

Add public transit.
Dissuade use of cars.
Build garages on the edge of town.

Report Objectionable Content
Email Town Square Moderator
4 people like this
Posted by Professorville Resident
a resident of Professorville
on Apr 9, 2017 at 10:12 am

Another way to handle it is to make the parking available for only a few hours a day.
That way it would actually serve community needs w.r.t. retail/dining.

As in shut down the parking structure/disallow cars to enter all but lunch time and dinner time.

If folks don't agree to that, then why are we building the structure?

Report Objectionable Content
Email Town Square Moderator
12 people like this
Posted by Curmudgeon
a resident of Downtown North
on Apr 9, 2017 at 7:20 pm

The motivation here is for Palo Alto taxpayers to subsidize developers who underparked their erections to maximize profits, by providing the missing parking at public expense.