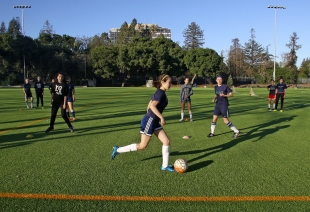 Girls in the Palo Alto Soccer Club perform soccer drills and exercises at El Camino Park’s soccer field; a park that is often fully booked for games and after school clubs, on March 27, 2017. Photo by Veronica Weber.

When Palo Alto's largest park officially opened to the public 60 years ago, child-sized gopher holes and tiny pedal cars were all the rage.

Named after former Mayor J. Pearce Mitchell, the sprawling park in south Palo Alto also featured a roque court, a miniature freeway, horseshoe courts and a metal climbing horse named "Picasso." Constructed between 1955 and 1957, the 18.5-acre park near East Meadow Drive was the city's response to the growth spurt of the 1950s, and its designer, Robert Royston, made every effort to cater to every age group -- the picnicking families, the chess-playing seniors and the tiny humans who liked to pedal around on a miniature freeway.

Much has changed since those days. Palo Alto's population is older and more diverse; roque has gone out of vogue; and the word "autotopia" is today more likely to connote rage and frustration than freedom and whimsy. No one could have predicted in the 1950s that seniors would flock to Mitchell Park, which has since been expanded to 21.4 acres, to play pickleball on the weekends or that the park would become home to the Magical Bridge, the region's first playground for children of all abilities.

Some things, however, continue to ring true. Palo Alto's population is once again growing at higher-than-expected rates, prompting competing demands for recreation space. City officials are once again scouring for possible sites they can buy and convert into parks. And the city's ever-evolving network of 32 parks and 4,165 acres of open space continues to delight even those residents who regularly grouse about things like traffic, housing, parking and airplane noise. In the most recent National Citizen Survey, 93 percent of the respondents said they had visited a neighborhood park within the past year and 89 percent ranked their park as "excellent" or "good."

To sustain and improve its park system over the next two decades, Palo Alto embarked four years ago on its most ambitious planning process in the past half a century. Informed by extensive surveys (including ones conducted online, at meetings and at parks), the Community Services Department and the city's Parks and Recreation Commission are now putting the finishing touches on the new Parks, Trails, Open Space and Recreation Master Plan. The City Council is expected to adopt it in late spring or summer.

Rob de Geus, director of Community Services Department, told the Weekly that, while residents generally praise the parks system, the new plan identifies significant gaps. Those include a lack of bathrooms; an insufficient number of dog runs; and residential neighborhoods with no park space within a quarter-mile of their homes.

The new plan aims to address these gaps and to prioritize the dozens of recreation projects on the city's wish list -- including a new public gymnasium, adult fitness areas, community gardens and enhanced natural habitats.

Some projects will inevitably take longer than others. Major efforts, such as the redesign of Cubberley Community Center, the creation of a new Baylands Athletic Center near the Palo Alto Municipal Golf Course and the enhancement of a 7.7-acre site next to Foothills Park, remain unfunded and will likely take several years to design and construct. On others, including dog parks and park restrooms, staff hopes to move more quickly.

De Geus said that once adopted, the master plan will have the practical function of helping the city set its annual budget priorities. But the document will also have a valuable evangelical function. The hope, he said, is that the plan and its ideas will inspire the people of Palo Alto to get more involved in the park system, whether by enrolling in programs, volunteering or supporting fundraising campaigns for future improvements.

Implementation won't be easy or cheap, but de Geus stressed that the city has every intention of fulfilling the goals of the master plan. If that happens, here are five changes that local park users will see unfold over the next two decades.

Not surprisingly, dog parks have emerged as a key policy of the city's new Parks, Trails, Natural Space and Recreation Facilities Master Plan. The policy specifies that parks for canines will not be placed in open-space preserves and identifies a list of potential locations. Read more here.

It's hard to enjoy nature when nature calls and there's no room for relief in sight. No wonder then that 81 percent of respondents to a recent Palo Alto survey rated adding restrooms to local parks as "important or very important," making toilets the most coveted new amenity. Read more here.

Palo Alto has nowhere near the money it needs to pay for all the new dog runs, bathrooms and neighborhood parks that its parks master plan calls for. Private groups are expected to play a critical role in the city's implementation of the master plan. Read more here.

Residents' thirst for more parkland isn't hard to understand. According to the city's new Parks, Trails, Natural Open Space and Recreation Master Plan, there are several areas of the city -- in both the north and the south -- where park space is inadequate for the needs of its residents. Read more here.

Survival of the fittest

For a sneak peek at Palo Alto's changing demographics look no further than the shimmering lanes at Rinconada Pool. As afternoon arrives, Rinconada becomes a magnet the city's bustling youth aquatics program, which has more participants than all of Palo Alto's youth and adult sports camps put together. Read more here.

View a map of the city's parks and how close they are to identified areas with high or low population here.

4 people like this
Posted by Resident
a resident of Another Palo Alto neighborhood
on Mar 31, 2017 at 10:22 am

I read the article expecting to read about some news, instead it was just a magazine type article with nothing that could be called "news".

Report Objectionable Content
Email Town Square Moderator
19 people like this
Posted by parent
a resident of South of Midtown
on Mar 31, 2017 at 11:50 am

There are many creeks in Palo Alto. Can the city build "linear parks" along the sides of the creeks, like the Stevens Creek Trail and Permanente Creek Trail in Mountain View? These are great trails (in Mountain View) for car-free jogging and bicycling and lots of people use them to commute to work. Most of the creeks in Palo Alto run east-west and east-west bicycle routes in the city are currently terrible, so building trails along the creeks is a huge win-win.

Report Objectionable Content
Email Town Square Moderator
19 people like this
Posted by park neighbor
a resident of Midtown
on Mar 31, 2017 at 12:46 pm

Just wish there were a way to enforce a "shared-space ethic" when some park users at Greer (frankly, usually non-Palo Altans) claim prime public area early Saturday AM, and set up large event tents complete with amplified music in violation of city policy.

PAPD tends to turn a blind ear.
Residents nearby left to suffer thumping bass all weekend.
Maintenance crews left to clean up the mess on Mondays.

Some signage at least? Just a thought.

Report Objectionable Content
Email Town Square Moderator
13 people like this
Posted by sneetch
a resident of Ohlone School
on Mar 31, 2017 at 8:06 pm

park neighbor - how do you know these people are non palo altans?
do they have a star in their belly?

Report Objectionable Content
Email Town Square Moderator
11 people like this
Posted by bathrooms
a resident of Barron Park
on Apr 1, 2017 at 12:08 am

Palo Alto may want to re-think adding any more bathrooms to the city's parks. In SF, it's well known that bathrooms=magnet for homeless persons. Consequently, in several cases, neighbors have successfully fought to keep bathrooms from being built in their local parks.

More resources and attention to the Palo Alto Baylands Park. I like going there and would appreciate increased police/ranger patrols for when I visit there by myself, plus the boardwalk getting re-opened, plus encouraging dog owners to pick up after their pets. If you haven't been out there since the hill on top of the old dump was expanded and opened, go and check out the fantastic views!! A great park in our city.

Report Objectionable Content
Email Town Square Moderator
4 people like this
Posted by Local
a resident of Another Palo Alto neighborhood
on Apr 3, 2017 at 7:46 am

@Sneetch,
Having had the same sort of issue, I'll answer that. Our area is very neighborly, so I've just asked, and been told by the people themselves that they weren't from Palo Alto. Given the large number of people who use the City during the day for their jobs, it's not surprising they would feel ownership sense of the nearby parks. I don't mean Palo Altans having events with others, I mean groups where no one was local.

What is going on with the Lucy Evan's Nature Center? Is there still a grand reopening party scheduled for this month?

Report Objectionable Content
Email Town Square Moderator
2 people like this
Posted by musical
a resident of Palo Verde
on Apr 4, 2017 at 7:01 pm

Don't expect any progress on the boardwalk.

Coronavirus: Plan ahead now for a big outbreak
By Diana Diamond | 22 comments | 4,650 views

The first few seconds after awakening; before I remember the virus
By Chandrama Anderson | 0 comments | 1,849 views

Can you Stay Healthy without Making More Trash?
By Sherry Listgarten | 2 comments | 1,209 views