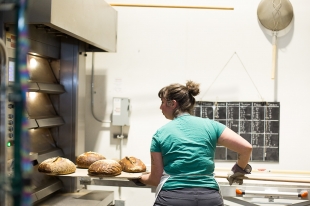 As Kneaded Bakery owner Iliana Berkowitz moves bread from the overn at the KitchenTown on March 21, 2017. Photo by Michelle Le

This is a wonderful idea! Yum! Hope it continues to go well for As Kneaded.