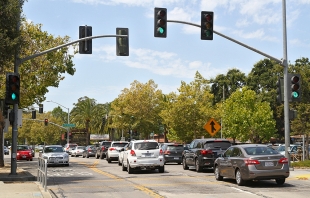 We need to kick out Google and Facebook so that they stop concentrating people from every corner of the globe in a small town that can barely accommodate them.

It's an overpopulation issue, not a "single-occupant vehicle" issue. You'll never solve the problem until you accept this fundamental truth.

While Lyft (and Uber, etc...) might lighten the demand on parking, it does not decrease traffic, unless it is used by more than one solo driver in the same car. I would assume that most people using Lyft are coming in on their own.

Also, the overall numbers look very meager. I would like to see data for how many workers drive into Palo Alto and how they all get here. "All" might be a reach, but a thorough study.

If I'm doing the math from the article properly, there are approximately 5625 solo drivers (if 450 represents 8%) and then there are a total of a little under 10000 total workers coming to Palo Alto every day (if 57% if workers are solo drivers)

Does anyone know how many people actually come in to Palo Alto on an average work day?

@Res - kicking out Google and Facebook would do nothing to help downtown traffic, which is what the article is about. Neither are based downtown. Not to mention that's not a great idea...

Report Objectionable Content
Email Town Square Moderator
2 people like this
Posted by Resident
a resident of Another Palo Alto neighborhood
on Feb 27, 2017 at 2:02 pm

I don't see anywhere in this article what is being done to help people park, or to move efficiently around Palo Alto in a car. There are lots of people who drive out of town for work, occasional business, shopping, recreation, etc. Palo Alto may end at the City boundaries but people's live cross those boundaries every day. The City should be working with its neighbors to get better accommodations for those who live and work in the region and not suppose that Palo Alto is just getting workers coming in every day which is the sole means of clogging up our traffic.

Until I see some improvements on these types of ideas I can't say that Palo Alto is serious about sorting its traffic problem.


Report Objectionable Content
Email Town Square Moderator
4 people like this
Posted by Online Name
a resident of Embarcadero Oaks/Leland
on Feb 27, 2017 at 3:01 pm

What's being done to adjust the PA Shuttle times to coincide with school drop-offs in the mornings and pickups in the afternoon?? Having the PA Shuttle has already cost us the VTA bus routes for which we're now paying an increased sales tax and getting nothing for our money.

Fixing the shutting timing and routes sure wouldn't cost $3,900,000 or even $500,000 and would be guaranteed to reduce traffic during the morning rush hour and during the non-rush hour afternoons.

This is not a new idea; it's been discussed here for several years with nary a response from our Transportation Dept. or City Council or Mayor -- all of whom seem to be eager to throw $1,000,000 at a failed bike program, to add more unwanted roundabouts and sharrows and bollards.

Getting a response would be special.

You Can Help: Scents and Migraines
By Chandrama Anderson | 0 comments | 1,918 views