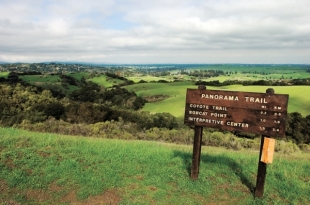 The results of the 2016 National Citizen Survey indicated residents want to see more parks, trees and bathrooms around the city. Photo by Veronica Weber.

1 person likes this
Posted by Resident
a resident of Another Palo Alto neighborhood
on Jan 30, 2017 at 9:00 am

Yes, we all have ideas of how our parks should look. Some of these ideas are quite good and should be investigated further. Our parks should not necessarily be carbon copies of each other, particularly the "destination" parks, but neighborhood parks should definitely have facilities of equal value to users e.g. restrooms and picnic tables. I agree that there should be time each day for a park to have an off leash hour for dog owners.

I personally would like to see all children's play areas having a fence around them. This would prevent toddlers wandering off while a parent is changing a baby diaper or has another reason to take their eyes off their child for a few minutes. It would also prevent off leash dogs from getting into the play area and doing their business in the sand. It would obviously make it more difficult for someone aiming to harm or kidnap a child to get away unseen.

Just more green in general. Stop building concrete and build more parks. More nature will do this community some good. Yes another community center would help also, especially since population has gone up and if you ever want to sign up for anything you have to sign up fast or else there's not room.

We appreciate the service that Bob and Dennis have given the City but you do have to wonder how much their pensions are going to costs us over the rest of their lifetimes.

If Bob started his career with the City at say 25 and he retries at 52 after 27 years service and lives to the average life expectancy of 78.8 years he will almost collect his retirement package as long as he worked. If he lives past that well he will ultimately make more money in retirement than he will for working the job.

This is why the City of Palo Alto's general budget goes more and more to cover the burden of employee retirement than to operation services. This model is unsustainable unless you continue to offer less services and or continue to raise taxes in the future. Either way it's going to get bleak for the next generation and I do hope Bob and Dennis realize the burden they and others in the cities employee are putting on all community members.