This year's forces of good, from teens overcoming adversity to a community-wide search for a missing mentally ill man 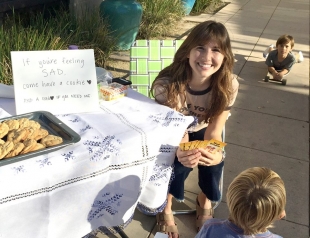 As stunned, Democratic-leaning Palo Altans grappled with Donald Trump's election to the presidency on Nov. 8, one mother, Whitney Lundeen, and her two young sons took to the streets -- not to protest but to offer post-election comfort. Photo courtesy Margot Olsen.

Like this comment
Posted by Longtime Resident
a resident of Leland Manor/Garland Drive
on Dec 31, 2016 at 11:35 am

The article reports:
"In mid-December the Palo Alto City Council unanimously approved spending $15,000 to support the Donkey Project, which is seeking to raise $125,000 to cover five years of expenses for the donkeys."

Only in Palo Alto does it take $25K per year to care for 2 donkeys.

Even 15K from council. I mean, really. It's time for taxpayers to wise up. QUESTION LOCAL LEADERS. Be adults.

Anne Le Ziblatt, formerly of Tamarine and Bong Su, is back with a Vietnamese noodle bar in Redwood City
By Elena Kadvany | 7 comments | 3,384 views