Demand for Second Harvest services at record levels, but donations are way down 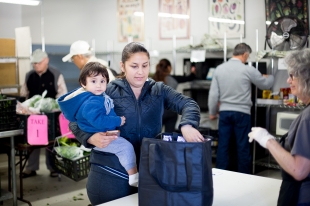 Second Harvest Food Bank is experiencing a huge increase in demand and a significant drop in donations, which will affect local food pantries like the Community Services Agency (CSA) in Mountain View. Above, a client picks up her groceries at CSA on Nov. 21, 2016. Photo by Michelle Le.

This is truly sad and reflects in microcosm what is happening in the nation with great income and wealth stratification. Certainly moved me to make a small donation within my meager means immediately online. Bernie Sanders truly understood and effectively communicated and engaged those hurting out here and hoping for a more compassionate region and country.

In the past, I've tried to donate to Second Harvest via the matching donation program at work. For some reason, they were not on the list of participating charities. Anyone else have problems with this?

6 people like this
Posted by Resident
a resident of Another Palo Alto neighborhood
on Dec 28, 2016 at 4:35 pm

As sad as this appears to be, it is possible that it isn't people not giving but that there are so many other causes competing for the charitable donations. Something like the Oakland Ghost fire can make other charities take second place. For various reasons, our year end giving was done earlier in the year and because these food banks need donations throughout the year others donating at different times may mean that December giving is down.

I just donated again. The website says: "Donate before the year ends and your gift will be matched, $1 for $1, by the Packard Foundation until we've raised $500,000. Make a meaningful difference for local families with a 2016 tax-deductible gift today!"

Economy is booming, but people on minimum wage still aren't able to make ends meet in this area. I do not know the exact ratio, but I'm sure there is one for living wage jobs to minimum wage jobs, like maybe 1 to 2 or 3? Every burger joint and other minimum wage jobs in posh places like Sur La Table has a Help Wanted sign out, because, yes, tech is booming here.

This is one of the finest and well-run charities in California. They deserve our support.

Report Objectionable Content
Email Town Square Moderator
Like this comment
Posted by I agree they are a great local charity.
a resident of Duveneck/St. Francis
on Dec 29, 2016 at 3:32 pm

I agree they are a great local charity. is a registered user.


Our family donates to Second Harvest every year. We'll step it up this year. Please join us! This charity does IMPORTANT work and they are well-rated for efficient use of funds.

“Far too many are choosing between paying rising rents or buying groceries." (quoted from Second Harvest's press release)

Is it a valid question to ask whether my donation effectively just goes into a landlord's pocket?

Report Objectionable Content
Email Town Square Moderator
4 people like this
Posted by be positive
a resident of Leland Manor/Garland Drive
on Dec 29, 2016 at 7:20 pm

be positive is a registered user.

Report Objectionable Content
Email Town Square Moderator
3 people like this
Posted by KenP
a resident of Barron Park
on Dec 29, 2016 at 7:23 pm

In response to "musical"

It's more like subsidizing Walmart, Starbucjks, Target, etc. companies (correct me if I'm wrong) that pay the too-low-to-live minimum wage. We're providing corporate welfare and so is the US Government with SNAP and other family support.

And we are helping those that can't work for whatever reason.

In the last few years I have had trouble locating Food donation bins for Second Harvest. Maybe an article in November that helps people find the food bins would help.