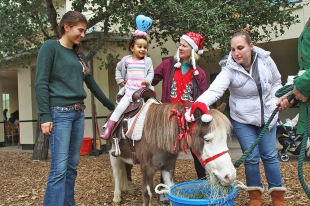 After 14 brain surgeries over the past three years -- including three this past month -- few things can get 11-year-old Austin Morgan to jump out of his hospital recovery bed and leave his wheelchair behind more quickly than a visit from Oliver, Buster, Henry, Nikki and Garfunkel.

These aren't your typical hospital visitors. This particular group includes two sheep, a miniature horse, a black lab and a blind lionhead rabbit with long tufts of fur encircling his face.

The eclectic mix of barnyard animals, part of the nonprofit Jasper Ridge Farm in Portola Valley, provides a sort of therapy for children up and down the Peninsula who are facing life-threatening illness, homelessness and other challenges. The animals go to hospitals, homes, homeless and domestic violence shelters and, more recently, county correctional facilities.

The nonprofit, whose summer camp was supported in part by a $5,000 grant from the Palo Alto Weekly's Holiday Fund this year, also offers riding programs and animal encounters for children, as well as veterans, at its new 2.5-acre farm at 2720 Alpine Road, which opened in July.

"Austin loves animals and looks forward to coming out to see them every time, even when he feels really sick and tired and doesn't want to move," his mother, Angela Morgan, said on a recent afternoon at Ronald McDonald House at Stanford, where the two have lived for the past year while Austin receives medical treatment.

The weather was chilly, and Austin had undergone major surgery less than 24 hours earlier, but that didn't stop him from heading outside to pet Oliver's woolly back, brush Henry's mane and chat excitedly with the volunteers about the 20 or so animals at the courtyard holiday party.

"I know that goats eat cans, but I didn't expect that they would eat roses because of the thorns," Austin observed while making the rounds to greet each animal. "This one's fur is soft and very warm underneath. ... Oh no, look: He's a sloppy eater!"

His mother said the animals have become a bright spot during his recovery, helping him forget that he's 200 miles away from his home, his dog, his family and friends in El Dorado County. The animals' regular visits have encouraged him to spend his free time learning everything he can about them.

"They all call him the 'Dog Whisperer' around here," she said, smiling.

"Animals don't judge you. They don't care where you live, if you've lost your hair to chemo or whatever else," Mattes said. "That's the great gift with these animals. Kids forget why they are in the hospital or at a shelter. I watch them bury their fingers in the sheep's wool and squeal with sheer delight. I can't change their family situation or their health condition, but for a very short time I can bring them an animal and just let them be carefree kids."

Mattes' own health struggles prompted her to reconnect with her love for animals nearly two decades ago. After being diagnosed with multiple sclerosis in 1998, she decided to leave her 20-year career as an executive search assistant to pursue her lifelong interest in horses. She became a trainer and horseback-riding instructor.

"I didn't know how many physical years I had left and didn't want to spend them behind a desk talking on a phone," she said.

This unexpected career change ultimately united Mattes with a 12-year-old riding student who would became the catalyst for the launch of Jasper Ridge after she was diagnosed with a malignant brain tumor in 2003. Mattes said when the student could no longer travel to the barn to see the horses, Mattes borrowed a miniature horse and brought it to the girl's San Carlos house for a surprise visit shortly before she passed away.

"I drove it to the house, walked it up the path, up the stairs and right into the living room," she said. "I can still picture the look on her face when she saw that horse coming into the house.

"Something changed for me after that," she added. "I thought of that visit more and more. It finally hit me that I could bring that same experience to other kids."

Mattes rented a little piece of land from another therapeutic organization in Woodside, adopted a rabbit and partnered with local 4-H members, who loaned her small farm animals to take along on visits.

Last year, the farm served 1,500 children and veterans; it's on track to serve more than 2,000 this year at its new, larger facility on Stanford-owned property leased by Webb Ranch. Jasper Ridge is using the portion of land at the family-run horseback riding facility rent-free for perpetuity.

Jasper Ridge also has access to the full-size horses at Webb Ranch, so it can provide on-site trail-riding lessons. In addition, the farm is seeking to expand its summer camp program from two week-long sessions to as many sessions as financially possible. The free week-long and day camps, which are funded solely by grants, provide transportation, lunch, time to interact with small farm animals, and lessons on horseback riding and animal-care for children from local hospitals, shelters and special-needs schools. A $6,000 grant is enough to provide 12 campers a week-long session.

Jasper Ridge relies entirely on donations and the help of 95 volunteers, who provide everything from loaned animals and poop scooping to assistance for children during trail rides. In 2015, the nonprofit raised $270,000 for programs. The nonprofit is in the process of raising $100,000 to build a covered riding arena, so its programs can run year-round.

"The program has grown so quickly beyond my wildest dreams," Mattes said.

Coronavirus: Plan ahead now for a big outbreak
By Diana Diamond | 21 comments | 4,533 views

The first few seconds after awakening; before I remember the virus
By Chandrama Anderson | 0 comments | 1,433 views