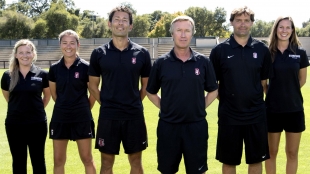 Paul Ratcliffe (third from right) and his coaching staff were honored as the National Soccer Coaches Association of America Regional Staff of the Year in the Pacific region. Photo by Norbert von der Groeben