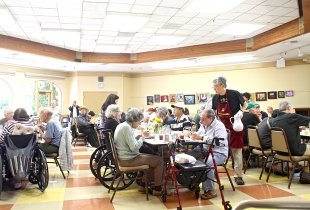 Lunch is served to seniors by the La Comida program in the Bryant Street dining room of the nonprofit Avenidas on July 16, 2015. The La Comida board of directors is protesting a renovation project that will shrink the dining room. Photo by Veronica Weber.

La Comida is appealing the Architectural Review Board's (ARB) recent approval of the exterior appearance of the project, yet La Comida has no apparent issue with any exterior feature of the project. In other words, the interior floor plan issue that La Comida cites in their appeal is irrelevant to the ARB decision. La Comida's action is simply obstructionist in nature. They should instead take their issue to an appropriate forum.

The quote that La Comida is asking for 1,000 additional square feet is misleading. The 1,000 square of space they are seeking is much less than the amount of the existing dining area that they will be losing.

The author of this article would do well to visit the dining area during lunch and observe that their are far more people going to Avenidas for lunch than for anything else. They're kicking out their #1 attraction.

The appeal to the ARB is appropriate as the very design itself is taking away program space the do to the actual construction,
The appeal stated..."Avenidas has been unwilling to firmly commit any auxiliary space to La Comida for use during lunch hours,"
This is what appeals are for.


Report Objectionable Content
Email Town Square Moderator
7 people like this
Posted by JSSS
a resident of Evergreen Park
on Nov 23, 2016 at 12:01 pm

JS is obviously some inside City person who is privy to a discussion which occurred between La Comida and the City, this past Monday. For the most part Avenidas is not an attractive organization for seniors. It's incredible that the City puts so much emphasis and support to an organization that operates only 9 to 5 weekdays with senior activities. When I do become a senior, I have no plans to attend anything at Avenidas. The place is so uninviting. Renovating the building will just be putting lipstick on a pig. I really do not see what it offers to the senior community of Palo Alto, and surrounding communities. It seems like a waste of city and county funds. Just one person's opinion.

Report Objectionable Content
Email Town Square Moderator
21 people like this
Posted by Haves vs. have nots
a resident of Duveneck/St. Francis
on Nov 23, 2016 at 12:39 pm

Haves vs. have nots is a registered user.


This sounds like a battle between haves and have nots at Avenidas. People who go there for meals are hungry or disabled enough they can't cook for themselves easily any more.

The program improvements that will replace La Comida seats are classes on how to use technology--read: for people who can afford fancy gadgets.

Who is Avenidas serving? There are plenty of low-cost tech classes in town. Is it possible Avenidas program priorities are misplaced?

Lots of needs out there. How to balance....that is the question.
But, to me this is an issue of ownership. Avenidas owns it and subleases to the lunch program. That is their choice and right. That's the law about ownership. Not respecting that fundamental right is THEFT of their property.
Don't undermine that concept.dbgsc

Report Objectionable Content
Email Town Square Moderator
15 people like this
Posted by Rich
a resident of Gunn High School
on Nov 23, 2016 at 3:41 pm

And Avenidas is not the owner of the building. The city of Palo Alto is the owner.

The kitchen was donated to the city by the rotary club for the purpose of serving seniors. Now they getting pushed out.

This is just another example of gentrification. We give lip service to helping the needy, so long as it doesn't get in the way of other priorities.

It's a shame that research connected to profit making activities will have priority over La Comida regarding space allocation in a city owned building.

It is also outrageous that Avenidas intends to compete with La Comida if the resulting space is too small and La Comida has to relocate This could result in diner volume levels insufficient to sutain the program.


The city council will soon have the opportunity to demonstrate where their priorities lie. If they are looking for a design issue necessary to express their will, they can point to the altered and inferior view from the north side of the building.

Report Objectionable Content
Email Town Square Moderator
13 people like this
Posted by Concerned citizen
a resident of Barron Park
on Nov 23, 2016 at 5:14 pm

My parents attend the lunch program at La Comida regularly. It is not a place that only provides nutritious hot meals to them , but also a wonderful place for them to socialize and pushes them to get out of the house.
I urge the reporters and the City Council members to pay a visit to La Comida! The place provides warmth to all sorts of seniors.
The volunteers know you by name and treat you like family.
Please help reach a plan to satisfy both sides of the party.
There must be a win win solution.
The management at Avenidas, please think carefully, yes, you can operate a lunch program on your own, BUT,
Can you provide the same friendly environment?

A note to the City Council members, please think carefully before you make a decision! Provide the best to our seniors!
Ask Avenidas to work out the space issue.
Development, parking, these issues are important , but we are talking about real humans, our beloved senior citizens now!
We will all become senior citizens one day!
Pay more attention to La Comida needs!
Thanks

Report Objectionable Content
Email Town Square Moderator
7 people like this
Posted by Move to cubberly
a resident of Duveneck/St. Francis
on Nov 24, 2016 at 7:38 pm

Report Objectionable Content
Email Town Square Moderator
5 people like this
Posted by Gentrification
a resident of Downtown North
on Nov 25, 2016 at 9:12 pm

A good number of people on the Avenidas board are involved in development, construction, money, and such, including Liz Kniss,(Council rep) long time friend of development. Web Link
So yes, gentrification is very much their style.

The sizable amount spent on Marketing, -the multicolor brochures, several newsletters, many emails, regular mailings, the website - is more appropriate to a big moneymaking enterprise.
There are a number of free classes but many are in the $60 - $110 range. The fees climb regularly.
And of course, developers make big money on the design and construction.

Report Objectionable Content
Email Town Square Moderator
5 people like this
Posted by cynical
a resident of Crescent Park
on Nov 28, 2016 at 6:58 am

The ARB ought to question program and would have discovered that La Comida was being reduced in size in the Avenidas plan. Looking at the photograph in the article indicates that just won't work.

Agree with Move to Cubberly. Add to the reasons:much better for elderly; much cheaper construction with no underpinning of existing building or special earthquake retrofitting, better planning possibilities,no displacement of existing building program (plus easier parking planning). Pretty obviously a significantly better idea for Council to consider.

Entire Avenidas presentation was manipulated through the review process with the cooperation of CPC and the illogical use of unjustifiable historic studies to create an inappropriate solution that should have been denied by the ARB. Too bad Birge Clark lovers were not paying attention. The final threat of loss of funds was the nail in the coffin.

Is it possible that the Council will see the light?

Flying: How to lower your impact
By Sherry Listgarten | 20 comments | 3,404 views

My angst about the disaster of these two debates
By Diana Diamond | 34 comments | 1,962 views

Be the first to know.
Get local daily headlines sent straight to your inbox.
Sign up