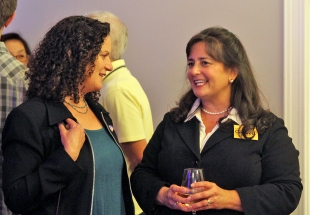 Penny is a registered user.


They are waiting for final counts. Caswell and Emberling are not, and never have been, combative with each other. They are colleagues and friendly, as your photo attached to the article shows. There is no "battle"...simply the act of waiting for an election outcome, though I realize that makes less stirring copy. Either one of them will maintain similar relationships with their future Board colleagues.

Neither Melissa nor Heidi are good representatives of our community, given the recent budget debacles and unwillingness to tackle the problem aggressively.

But at least one of them is only running for a 2nd term, whereas the other one is running for a third term. I don't believe in squatting. Give other people a chance.

I don't want Melissa to win. She just believes in more, more and more rigor for our students. Notice her daughter went to Castilleja, where there are no AP classes.

Report Objectionable Content
Email Town Square Moderator
14 people like this
Posted by Concerned
a resident of Duveneck School
on Nov 10, 2016 at 3:29 pm

@Parent: Melissa wants more rigor fir PAUSD to keep the reputation but sends her own daughter to Casti? I agree there is too much stress in PAUSD.

Report Objectionable Content
Email Town Square Moderator
23 people like this
Posted by Poison or hanging
a resident of Barron Park
on Nov 10, 2016 at 4:43 pm

It's hard to care much about this one.

Report Objectionable Content
Email Town Square Moderator
2 people like this
Posted by ferdinand
a resident of Barron Park
on Nov 10, 2016 at 8:49 pm

Castilleja actually does have APs, but did redesign [I think] their own advanced science courses. Perhaps it is Nueva that does not have APs?

Report Objectionable Content
Email Town Square Moderator
7 people like this
Posted by Stew Pid
a resident of Community Center
on Nov 11, 2016 at 4:11 am

Is it too much to hope that they each lose to the other? So we can move the school district forward again?

Posted by Name hidden
a resident of Terman Middle School