Caregiver Support Group is part of larger network of classes, services at Avenidas 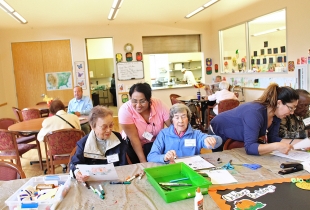 Dina Caceres, center, an activity aide at the Avenidas Rose Kleiner Center in Mountain View, talks with Chu-Ying Chi, left, and Sylvia Smitham, right, about the artwork they are creating for a Halloween-themed bulletin board during an arts and crafts session on Oct. 3. The class is part of the adult day health program that provides support and assistance to participants as well as their family caregivers. Photo by Veronica Weber.

Contributing writer Chris Kenrick can be emailed at ckenrick@paweekly.com.