On anniversary of Steve Jobs' death, trees honor his life 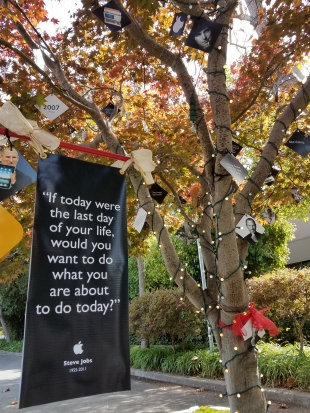 Two trees in Old Palo Alto are decorated with quotes made by Apple co-founder Steve Jobs, like this one from his commencement speech at Stanford University in 2005. Photo by Jocelyn Dong.


Steve Jobs was our home grown creative genius! I'm glad that his beautiful design sense was awakened buy that first Topography class at Reed College! His creativity helped to make the beautiful Apple products we see today! Thanks Catherine for honoring him with these lovely trees!


This is a very nice way to commemorate Steve Jobs contribution to our society, the bay area, Palo Alto and mighty USA.

As a frequent rider down our Bryant Street Bike Boulevard I've gotten so much joy out of seeing the different displays on these trees as I pass between them, but never knew who was responsible for them. Thank you PAOnline for featuring this and thank you Catherine Debs for the joy that you bring others.

Report Objectionable Content
Email Town Square Moderator
14 people like this
Posted by vmshadle
a resident of Meadow Park
on Oct 10, 2016 at 11:32 am

vmshadle is a registered user.


I agree with Yesh Ballon. As a Bryant Boulvevard bicycle commuter, I have long wondered who is responsible for all the fun and ever-changing displays. Now I can offer public thanks to Catherine Debs for adding to our quality of life.

Report Objectionable Content
Email Town Square Moderator
10 people like this
Posted by Tree lover
a resident of Professorville
on Oct 10, 2016 at 12:16 pm

I have often wondered who decorated those trees. Its a great thing to do and a real 'feature' of the area. Thank you for doing this!

Report Objectionable Content
Email Town Square Moderator
9 people like this
Posted by Miranda
a resident of Another Palo Alto neighborhood
on Oct 10, 2016 at 12:38 pm

Report Objectionable Content
Email Town Square Moderator
13 people like this
Posted by A Big Thanx
a resident of Midtown
on Oct 10, 2016 at 1:50 pm

A Big Thanx is a registered user.


As a bike rider, I have wondered for YEARS who was putting up these delightful displays for every occasion and holiday!

As a neighbor, my grandchildren have been delighted with these displays--they think it's Christmas every day!

Thank you so very much! My grandchildren send you warm hugs!

Report Objectionable Content
Email Town Square Moderator
13 people like this
Posted by Riding Roy
a resident of Downtown North
on Oct 10, 2016 at 3:20 pm

"....how many people have been hit by cars cause they are so busy staring at their iPhones?"

Probably fewer than the bicyclists and pedestrians who were hit by cars driven by people who were so busy staring at their iPhones.

I am not sure why you chose this thread to vent on but I felt compelled to defend those who almost always suffer the consequences regardless of fault.

Report Objectionable Content
Email Town Square Moderator
6 people like this
Posted by A neighbor
a resident of Barron Park
on Oct 10, 2016 at 8:36 pm

Oh, how wonderful. I have been enjoying the decorated trees for a long time while biking on Bryant. The decorations are so beautiful, sometimes with the wind it looks mesmerizing. I look forward to seeing them every time.

Report Objectionable Content
Email Town Square Moderator
2 people like this
Posted by Susan Cole
a resident of Evergreen Park
on Oct 30, 2016 at 11:03 pm

Add my name to the list of people who have been wondering who adorned the trees at Bryant and Lowell with seasonal decorations. Thanks to Catherine Debs for adding this special touch to life in Palo Alto.

Flying: How to lower your impact
By Sherry Listgarten | 8 comments | 1,882 views