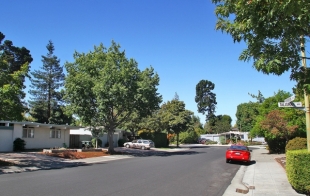 Homes along Evergreen Drive and Talisman Drive make up a portion of the Faircourt tract, which saw its application for a "single-story overlay" get rejected by the City Council on Oct. 4. Photo by Veronica Weber.

Berman says that the city needs to play a larger role in this. Then please step up and do this! You have had ample time.

For nearly three years Eichler owners have been trying to get the ear of the planning department and city council and were always pointed to the SSO as the only existing method for protection. No one at the Planning Department even knew how it worked because it had not been done for 10 years. It was up to the residents to volunteer hundreds of hours of time researching, learning the zoning code, writing letters, informing neighbors, gathering support, responding to neighbor concerns, speaking at City Council meetings.

Throughout this time, most of the PTC and CC members (with the exception of Holman, Dubois, and Schmid who cared) chose to remain uninformed about a process that directly impacts hundreds of Palo Alto homeowners - albeit mostly in the less influential area south of Oregon. Now they are denying these efforts, yet not presenting an alternative to the IR process which is highly subjective in its interpretation and ignored all the time. Time to step up and deal with this, please! The ignorance and lack of alternatives is what has caused the strife between neighbors.

It's election season and now lip service is being given to protect Eichler neighborhoods. We are waiting.

"It's election season and now lip service is being given to protect Eichler neighborhoods. We are waiting."

I'm not. Eichers were a blight on the agriculture that used to be in Palo Alto. If we want to be all for historical preservation, I'd rather have fresh fruit than fruity homeowners.

Report Objectionable Content
Email Town Square Moderator
12 people like this
Posted by imwithher
a resident of Leland Manor/Garland Drive
on Oct 5, 2016 at 10:25 pm

kudos to council members who rejected another unlawful proposal

Report Objectionable Content
Email Town Square Moderator
2 people like this
Posted by MCM
a resident of Greenmeadow
on Oct 5, 2016 at 11:07 pm

Boy, those darn Eichler owners-trying to push thru another UNLAWFUL proposal.
We certainly can't allow any more architecturally significant homes or preservation of neighborhoods
with single story homes here in PA.
Yes siree, let's turn all of the Eichler neighborhoods into
dense pack housing just like Southern California.
Can hardly wait to eliminate the "Eichler blight".

Report Objectionable Content
Email Town Square Moderator
2 people like this
Posted by Resident
a resident of Another Palo Alto neighborhood
on Oct 6, 2016 at 1:11 am

I wonder how all this fares with the movement to have second units, granny flats, etc.

It sounds like Palo Alto wants its cake and eat it situation.

Either we preserve our neighborhoods, or we allow any residential unit to build, build, build, regardless of what the roads, the parking, the water/utilities, etc.

It sounds to me that this is a precursor to allowing any single home to be knocked down and a multi people unit be built in its place. 11 bedrooms and 14 bathrooms, anyone?

You Can Help: Scents and Migraines
By Chandrama Anderson | 0 comments | 1,128 views