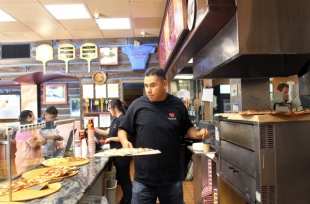 Jorge Garcia, a delivery driver and counter assistant at Pizza My Heart, warms up slices for customers during the lunchtime rush on Aug. 26. Pizza My Heart raised their base wage to over $10 an hour, and in turn raised their pizza prices to cover the costs. File photo by Veronica Weber.

Why not let the market decide?

Doesn't the city council have more pressing issues to deal with?

It makes a great deal of sense to increase wages in sync with surrounding cities like MV and Sunnyvale. Otherwise Palo Alto would likely lose low-wage workers to these other cities.

It is a ridiculous discussion. Restaurants are having a tough time hiring anyone for less than $15 right now. Also, somehow the state of California passed a most unfair law that does not permit the pooling of tips, i.e., when you tip on your bill, only the waiter gets the tip. It is not pooled to be shared with the back of the house. Now could the waiters do their job without back of the house support?!

Basically, if I could have my way, all employers would provide appropriate salaries and benefits and do away with the tipping protocol. Please note that downtown Palo Alto restaurants are adding to your bill an "Employer Mandated" amount of money to cover the costs they now pay for health insurance for which they should be paying. I have wondered what would happen if you deducted that from your bill. If anyone knows, respond here.

Report Objectionable Content
Email Town Square Moderator
2 people like this
Posted by john_alderman
a resident of Crescent Park
on Sep 27, 2016 at 11:15 am


@regional plan - Though, as minimum wage jobs are eliminated in neighboring communities, there would be nowhere for Palo Alto low wage workers to go. It would be smart for a city like East Palo Alto or Redwood City to keep their minimum wage lower, and invite businesses to move jobs to those communities. Put food prep, warehousing, phone center in EPA and just hire a skeleton staff in PA/MV to sell/serve.

Report Objectionable Content
Email Town Square Moderator
3 people like this
Posted by TV waatcher
a resident of Midtown
on Sep 27, 2016 at 12:09 pm

Thank you Gennady for your story.
I was really interested in this subject and tuned in to Channel 26. When Wolbach gave his long, long, rambling speech, I was looking for the usual trick in his speeches.
But I gave up after about 15 minutes and turned off the tv.

Can't help wondering whether all that long winded verbiage is intended to discourage understanding. He certainly fooled me during the last election.

Report Objectionable Content
Email Town Square Moderator
36 people like this
Posted by Jason
a resident of Palo Alto Hills
on Sep 28, 2016 at 7:25 am

This is unfortunate. People who do not earn enough to live here will now be able to stick around a bit longer at mostly our expense. Why can't Palo Alto be a place just for hard-working smart folks? We keep fighting the inevitable. My neighbors and I would not mind having to drive a few more minutes for haircuts and restaurants.

@jason: thank you for speaking our minds. it is hard to see our town get used like this.