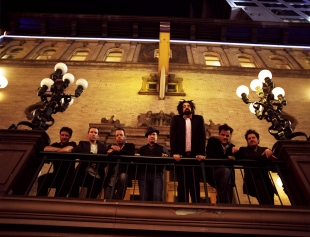 Counting Crows return to the Bay Area - good show, both bands were fun! The warm-up guy, Shelby something, was awful and very poor taste - lose him.

K Phillips was ok, during their set, the lighting turned intermittently via moving spots on the crowd, in our eyes was annoying. Rob Thomas and band played a good long set, liked the LED lights. Counting Crows started slow and built up in power and presentation, liked their lighting and the choreo on them, great finish with backup singers from K Phillips, Rob Thomas and Rob all joining in, it seemed like they were enjoying themselves which really made it great for the audience. Thanks!

I managed nightbreak, worked the door and bar... Never saw anyone from counting crows... they are like many of the "bay area" bands who never really played the local scene.. haha

Chris played there long after he made records, he would book it for a week at a time to get ready for a tour...

Live the lie my brother - We believe you