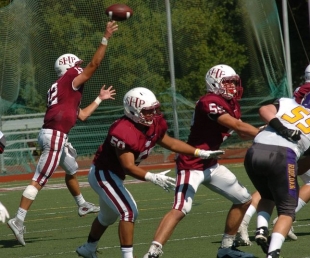 Josh Suzuki (50) and Kyle Stadler (55) will be blocking for a different QB this year. Photo by Keith Peters.

High schools that can recruit ... sorry pardon me "attract" athletes ... should not be able to play lower than Division 1 or Open Division. Allowing a school like Sacred Heart to play Division 3 which includes small public schools is a joke, they should hardly be proud of that.

To "play fair": Get some facts before you post uninformed comments. If you think SHP is recruiting athletes, you don't know that there are many exceptional athletes at other area schools who applied to SHP but weren't offered admission. If you think the SHP football team doesn't play schools that are large or credible, you haven't looked at the schedule of opponents from previous years (including when it won the CCS Open Division two years ago). Where SHP has an advantage is in its leadership: head coach Pete Lavorato and his staff may be the best in the state because of the way they motivate the student-athletes.

I didn't mean to pick on Sacred Heart they have a fine program. My point is that when they have a good year they play open, when they don't have as good of a year they are allowed to play down to D3. Other private schools do the same thing. If you think that is fair to smaller public schools results don't lie. Here are the playoff results from last year. Here are your facts...
Web Link

notice how the private schools faired against public schools and you see this in most sports. CCS needs to create a better playoff system

as for recruiting, it depends how you define recruiting. don't kid yourself it happens. My view is it's not worth the effort to enforce rather create a playoff structure that is more fair to those schools who can't "attract" talent but rely on the random luck of who lives in their area

Private schools charge tuition, they also offer financial scholarships and assistance. It's not surprising that those often find their way to talented athletes.

Report Objectionable Content
Email Town Square Moderator
1 person likes this
Posted by don't be a hater
a resident of Menlo Park
on Aug 22, 2016 at 9:40 pm

To "play fair": CIF and CCS define the divisions and formats, and a school doesn't make its own choice of level. When CCS had an Open division in 2014, SHP was in it and won it by beating perennial power programs Los Gatos and Bellarmine. In 2015 CCS changed the postseason format and prevented SHP from playing higher than its "native" division, but it definitely wanted to go higher. And if you look at SHP's choices of non-league opponents in recent years, you will realize that most of them are very large schools that represent aggressive choices to play "up" and not "down" as you suggest is their preference.

Your general criticism of the way public and private schools are grouped is unclear, as there are many cases of large public schools being in the same division as small-medium private schools, not the reverse as you suggest. In SHP's division, every other school in their division is public and has a student population about triple their size, so that seems like a disadvantage to SHP, not to the public schools as you suggest. Or maybe you don't realize how small SHP is (150 students per class) or how large its rival public schools are (400-500+ per class)?

The CIF/CCS formats aren't perfect, but they are trying to devise a system that balances many factors. Don't be a hater toward schools like SHP that have built successful programs just because of the imperfections of the larger system. Maybe the real problem is the inconsistency of the programs at the public schools that you think are being treated unfairly? You might say that it is simply an issue of money, and to be fair that is one factor, but the quality of coaching, culture within the program, and support of the community are far larger factors. The unfortunate reality is that not enough people in the public schools and those schools' communities show enough sustained commitment to many athletic programs, especially football.

Report Objectionable Content
Email Town Square Moderator
5 people like this
Posted by I didn't know that
a resident of Menlo Park
on Aug 23, 2016 at 9:42 pm

The Private/Public sports argument has been going on forever and it's a loser no matter which side your on. The reason the privates tend to do better is coaching and participation rate. Sacred Heart has about 300 boys in the school and according to Max Preps they have a roster of 35. Approximately 11%. I will argue that if Menlo Atherton, with it's 2,279 students ( about 1,100 boys ) had a participation rate of 11% and fielded a football team of 121 players they would beat Sacred Heart each and every year.

You wrote "allowing a school like Sacred Heart to play Division 3 which includes small public schools is a joke, they should hardly be proud of that." This weblink taken from the CCS website shows the enrollment numbers from all of the member schools. After searching Won/Loss records I don't find one instance of Sacred Heart playing a football game against ANY of the public schools below, or even close, to their 615 enrollment number. Not one.

If you argue that Privates "recruit...pardon me attract athletes" then clearly Bellarmine with it's 1,600 boys should never lose in any sport.

Report Objectionable Content
Email Town Square Moderator
2 people like this
Posted by Mike
a resident of Atherton
on Aug 24, 2016 at 3:25 pm

Hopefully they don't have the exact repeat of last year.. [Portion removed.]

Flying: How to lower your impact
By Sherry Listgarten | 19 comments | 3,181 views