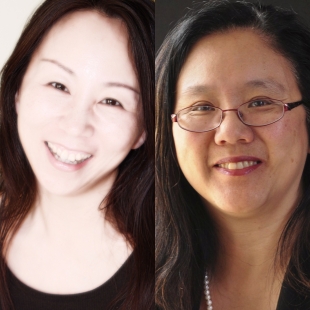 Sheena Chin, left, and Grace Mah, are running for Mah's seat on the Santa Clara County Board of Education in the November election. Photos courtesy Sheena Chin and Grace Mah.

Well, I'll be honest I'm not really sure what the county school board does either. It sounds good on paper but falls pretty short if you contact them about any of their supposed domain.

I suggest people watch the in-person debate. They should be posted online. There's no way you can tell the candidates for positions like these from what's on paper. Last time, it was really clear that Ma was the only reasonable candidate. I want to hear what the opponent has to say this time. Please take the time to listen to them speak for themselves.

Give other people a chance to take a fresh view.


Does she run the County SELPA? That is the organization controlling Special Education, and PAUSD is opaque about it. How do parents find out about County schools and programs for disabled? PAUSD tells parents no programs exist. County SELPA manuals require reporting events like restraining disabled children and losing disabled children or allowing them to run away from school campuses, but PAUSD seldom reports it. It is difficult to get PAUSD to tell parents what forms are required or who to tell if you fear a child was unsafe at school, and even harder to get PAUSD to report when it happened. Communication from the County is poor to non-existent.

Report Objectionable Content
Email Town Square Moderator
17 people like this
Posted by Kay
a resident of Midtown
on Aug 19, 2016 at 7:16 am

Give give other people a chance. Two terms is enough. Melissa Baten Caswell has had enough time on the board of education as well. Two terms is sufficient time to make an impact and get things done.

Report Objectionable Content
Email Town Square Moderator
9 people like this
Posted by iCare
a resident of Gunn High School
on Aug 23, 2016 at 8:37 am

I have similar opinion to some comments above. What does the county board do for area 1? Why do people not know its existence? Lack of accomplishment? Mah was in the position since 2007. It’s almost a decade. I would be very interested to know the contributions that Mah has brought to the community for the past almost 10 years. I wonder what is the point of giving Mah another 4 more years.

Report Objectionable Content
Email Town Square Moderator
6 people like this
Posted by OPar
a resident of Duveneck/St. Francis
on Oct 17, 2016 at 10:23 pm

The main thing I want to know when it comes to the County board of education is where the candidate stands on charters. Mah got herself appointed by a pro-charter board when she rammed through MI at Ohlone using a charter threat.

The board can force a charter on a district that's turned down an application. In recent years, the county BoE has been very pro-charter.

So, I'd like to know Chin's stance on charters.

Report Objectionable Content
Email Town Square Moderator
7 people like this
Posted by Resident 12
a resident of Fairmeadow
on Oct 17, 2016 at 10:30 pm

Resident 12 is a registered user.


Grace Mah was partly responsible for the debacle that was/is Bullis in the Los Altos School District. Boy was that divisive, pitting neighbor vs neighbor, charges of elitism, etc. We really don't want a charter in PAUSD, or charter advocates on the board. I don't see how Chin can be worse than Mah in that regard. But, good question.


@iCare - Agree, I would like to see Palo Alto Weekly report on the County of Santa Clara school board election. It seems to have a lot of effect on PAUSD. The PAUSD Board and Superintendent cite the County school Board as reasons for doing things.

Who donates money to which County Board candidates? What impact does it have on our local school District? We know SELPA is supposedly run out of the County. But who is in charge of it? Are SELPA officials voted in, or do paid school District employees automatically run it and make their own rules? PAUSD's Board was (only recently) told by Holly Wade the SELPA manual is what she is using as PAUSD's policy and procedure manual and she should not produce a District manual because she thinks the Selpa manual should be used, we don't know what this SELPA entity does, who is on it, and what a vote cast for a school Board candidate does for it.

The County School Board web site is not very imformative, especially for disability related items. Aside from the SELPA and Charter Schools (from above posts), what else does County School Board control? What money does it give to PAUSD, and who controls it? What do our votes mean?

Report Objectionable Content
Email Town Square Moderator
2 people like this
Posted by County Boards
a resident of Los Altos
on Oct 18, 2016 at 3:33 pm

There are 5 SELPA's in Santa Clara County, each serving different areas. But a SELPA doesn't operate Special Education. It's just a mechanism for distributing funding. A school district like Palo Alto could elect to have the county run special ed in its district, and then the county would get the funding from the SELPA for that school district. The school district would still need to pay additional costs to the county. Most school districts run special ed themselves. Some of them contract with the county for certain specific special education services. The county board oversees the superintendent and the county staff, but they are still charged with operating according to state law. Mainly county's have special ed divisions to help the smaller districts and to offer services that optional benefit multiple districts, but these district still have to pay for the service.

So PAUSD has its own massive special ed program and is full independent of any county programs supervised by the board. That doesn't mean that all members of the county board don't need to supervise all the programs of the county. It just means it's unlikely to affect PAUSD.

The same thing is true for charter schools. The state has laws allowing parents to form charters. If a school board unjustly rejects a valid formation, then it goes to the county board. If the county board starts rejecting them all without cause, they will end up getting approved by the state board of education. The county board can't duck charters by just bouncing all the petitions.

Report Objectionable Content
Email Town Square Moderator
7 people like this
Posted by Greenacres
a resident of Green Acres
on Oct 18, 2016 at 6:42 pm

I don't agree that "we" don't want charters in PAUSD. If Larry Ellison wanted to build another DTech here, there would be lines a mile long to get in. You can't even get into a tour there if you don't log in within seconds of their posting availability. Imagine havng kids with great schooling but more independence, agency, and less stress, and not having to deal with the interpersonal meanness and nastiness from the district office. Addng a physical charter would mean finally the district would have to improve.

And by the way, Palo Alto has charters - they're county charters. The sky hasn't fallen.

Ma only got to the charter "threat" after trying to work with the district for five years. She showed an overabundance of patience in the face of five years of the usual wild goose chases the district surely put them through to avoid doing anything. The only way you get anything done here is through leverage, and Grace Mah showed a lot of courage to be the lightning rod for everyone else. I supported the program, not the methods, until I got to know a little more about how this place works. Then I was in awe.


According to County School Board's video "Who We Are":
Web Link

County School Board has fiscal oversight over all school Districts, appeals for expulsions (which needs more oversight in PAUSD because is all under the power of a single employee), charter schools, transfers, and ensures compliance with State and Federal mandates/regulations. This has not gone so well in PAUSD in the last years given the legal problems. Fiscal oversight may be okay, but did not help prevent the deficit.

Video also says it provides Fiscal and Administrative Support and services. How can we know if the County will offer them more cheaply than our District? District administrators have opposed using County services in favor of more PAUSD hiring. There are criticisms of swelling clerical ranks in PAUSD Administration.

Video says they provide direct special education services, but it is very difficult to find out any information about their programs.

PAUSD keeps SELPA information hidden, only releasing what supports what they want, then citing a SELPA policy as if it were a requirement. PAUSD does not tell parents how to get the whole picture, how to contact the SELPA, if it has any enforcement power, etc. For example PAUSD does not complete all emergency SELPA incident reports of violent and dangerous behaviors and child contact with School Resource Officers (police officers) and there was nothing families can do about it.

Flying: How to lower your impact
By Sherry Listgarten | 19 comments | 3,286 views