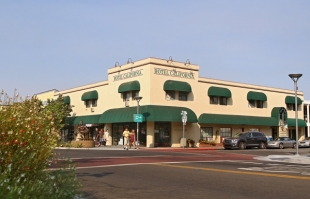 The longtime hotel on Ash Street in the California Avenue Business District will be converted into 20 single-room-occupancy units. Persons with incomes between $10,000 and $40,000 a year will be eligible to rent the units, which will cost $400 to $800 a month, depending on income level, said Candice Gonzalez, CEO of the Palo Alto Housing Corporation, the local nonprofit that will be managing the units.

Sand Hill Property did not return a request for comment. But Gonzalez said that Susanna Pau has long wanted to find real estate that would be appropriate for Palo Alto's low-income residents, but Pau prefers to remain low-key.

"We've talked over the years how to serve the low-income population," Gonzalez said, and when this opportunity came up a year ago, the Paus jumped on it.

"It's all being privately funded and there is no need to rezone the site. That simplified process -- it's almost a windfall," Gonzalez said.

The city needs thousands of units to meet low-income housing demand, she said. When the Housing Corporation opened its waitlist for its senior housing project at the Sheridan, 500 people applied in one day and many camped out the night before -- and there weren't any units immediately available, she said.

"All of our properties have hundreds of people on the waiting list at each of them. At the lowest income levels the units don't turn over for five to eight years," Gonzalez said.

Applications for the studios at Hotel California are being accepted now, and residents could start moving in as soon as Aug. 20. Interested parties can call the Housing Corporation's main office at 650-321-9709. Once occupied, the Housing Corporation will evaluate which resident services to offer based on the residents' needs, such as health and wellness or employment assistance, she said.

Of course there aren't any comments - developers are all evil and greedy and the PA bloggers might have to complement the Paus on this one. Thanks, Paus! Very generous


Thanks to the Pau's for their generosity!

This is just one example of how we can work together in Palo Alto to provide housing for a range of incomes. Great story

Report Objectionable Content
Email Town Square Moderator
25 people like this
Posted by Second Thoughts
a resident of Midtown
on Aug 9, 2016 at 1:06 pm

Second Thoughts is a registered user.

Report Objectionable Content
Email Town Square Moderator
10 people like this
Posted by jane_u
a resident of College Terrace
on Aug 9, 2016 at 2:06 pm

This is really great news! I hope there will be more housing option around transit and services hubs like California Avenue in the future. It's a start!

Report Objectionable Content
Email Town Square Moderator
6 people like this
Posted by Just the Facts
a resident of Gunn High School
on Aug 9, 2016 at 2:58 pm

@SecondThoughts, I don't know the backstory. Can you point me to some examples of the Paus cheating?

Report Objectionable Content
Email Town Square Moderator
35 people like this
Posted by Cant trust them
a resident of College Terrace
on Aug 9, 2016 at 3:00 pm

By all means. lets forget 3175 Hanover St and
Web Link
3251 Hanover St and
3300 El Camino and
1050 Page Mill Road and
2600 El Camino. And please don't bring up their contract violations (plural) at Edgewood Plaza. They still "cant find a grocer" for that Plaza, though the 10 homes they built are selling. Believable? No.
They are making a great investment on a major business street.

Report Objectionable Content
Email Town Square Moderator
13 people like this
Posted by Idiocy
a resident of Midtown
on Aug 9, 2016 at 3:12 pm

This is absolutely prime real estate being given to people who, let's be clear, are not even, in many cases, working full-time at a minimum wage job if they are within those salary ranges. Many will have substantial social issues. Why are we arbitrarily handing out prime Palo Alto real estate to these people when so many families who are doing everything right can't even afford to live here?

If you wanted to give some prime real estate to single teachers or something similar at way below market rates this could have been a prime candidate for inclusion. Instead, we'll be bringing in social problems to a prime commercial district and ignoring what might have been a rare opportunity for actual middle class housing.

It makes no sense.

Report Objectionable Content
Email Town Square Moderator
10 people like this
Posted by Be Positive
a resident of Leland Manor/Garland Drive
on Aug 9, 2016 at 4:52 pm


@idiocy - This is not a location that is being rebuilt to house families, these are single rooms with a communal kitchen and will house some of the most neglected of our residents. As for not "working full-time at a minimum wage job", many of the potential residents are probably working more than one job.

Perhaps the residents will turn out to be some of the restaurant staff on Cal Ave or the support staff at the nearby Sunrise Senior center.

Report Objectionable Content
Email Town Square Moderator
4 people like this
Posted by Dave
a resident of Duveneck/St. Francis
on Aug 11, 2016 at 2:17 am

To those of you who are convinced that anybody who is working class doesn't belong in this city -- you're the ones destroying Palo Alto, not those who want more housing.

A Pragmatic Approach to A Trillion Trees
By Sherry Listgarten | 2 comments | 3,689 views

The University of California’s flexible policies during COVID-19
By John Raftrey and Lori McCormick | 6 comments | 2,488 views

Repairing a Disagreement with your Beloved & “Physical” vs. “Social” Distancing
By Chandrama Anderson | 1 comment | 2,422 views