After years of delays, Palo Alto now has the needed permits and construction contract 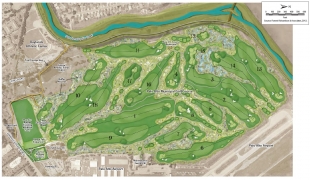 Both the Palo Alto Municipal Golf Course and the adjacent San Francisquito Creek will undergo work this coming year, prompted by the need to protect the area from flooding. Courtesy of Forrest Richardson & Associates.

Getting this done took a long time and it is nice to see it happen.

However, at the expense of ending the Maybell hearing to be continued next week, this was a disservice to the community in attendance and disrespectful of all the hard work the developer has put in working closely with the community.

Let's hope practical minds and common sense prevail on Tuesday and the Maybell 16 unit plan is passed without a useless (and potentially dangerous) pedestrian path and funds in lieu of units that might ultimately be allocated to a solution at Buena Vista.

11 million dollars for something used by a few hundred people?? Look at a map. Why not eliminate the golf course, and all the water (I know it's recycled) and build a southern onramp to the Dumbarton Bridge instead? So much of the back-up on 101 at University and Willow is caused by people trying to crawl down city streets to get to the Bridge. It's time to face the facts.

Report Objectionable Content
Email Town Square Moderator
13 people like this
Posted by Waste
a resident of Another Palo Alto neighborhood
on Jun 24, 2016 at 3:56 pm

I doubt that more than 100 people will use it! Golf is too time-consuming

Report Objectionable Content
Email Town Square Moderator
4 people like this
Posted by Golfer and PA President
a resident of Palo Verde
on Jun 24, 2016 at 6:51 pm

I for one am glad this is finally in motion, and look forward to its completion !

Report Objectionable Content
Email Town Square Moderator
2 people like this
Posted by MikeCrescentPark
a resident of Crescent Park
on Jun 25, 2016 at 10:24 am

The course hosts thousands of local golfers every year. Many older and retired locals who can't afford a country club membership. And many many young people practice and play here. Palo Alto High, Caatella and East Palo students. The only thing reducing play is the incredible disarray caused by now years of bureaucratic delay and confusion. And the restaurant hosts local wedding and graduation parties at reasonable costs.

Please get informed before making statements about the course.

Build freeway instead of green grass and parks , really?

Report Objectionable Content
Email Town Square Moderator
4 people like this
Posted by Ahem
a resident of Midtown
on Jun 28, 2016 at 12:36 pm

Ahem is a registered user.

Ahem... wrong the course will be watered with reclaimed water from the sewage treatment facility a cross the street.

Thank you City Council for believing in this project... a legacy that will benefits thousands for generations to come, and hopefully make the city some money.