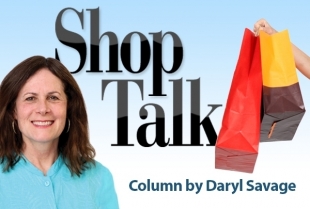 Got leads on interesting and news-worthy retail developments? Daryl Savage will check them out. Email shoptalk@paweekly.com. Associate Editor Linda Taaffe contributed to this column.


I also enjoyed Breakfast House, but it's utter lack of ambience made it vulnerable to a more sophisticated place like Bill's Cafe, where food, service and ambience dominated.

I loved Palo Alto Breakfast House when they first opened. The wait staff
were great and the food was very good and reasonably priced.

I would still be going there in preference to Bill's if they have kept up their
quality, but the service got sloppy, the food got worse. Finally I wondered,
why am I going here? The staff soon seemed to not care about their jobs,
so I suspect they were not being paid adequately. Food got cheaper.
They started toasting the salad toast on one side?

I stopped going. I don't go more often to Bill's, although Bill's is more
comfortable there is less food selection and the last time i was there the
salads were not as good.

I am sorry to see PABH go, but no, you can't blame PABH's closing on Bill's,
they did it to themselves. They also never did a anything to make it more
pleasant in there such as put some kind of sound absorption on the walls.

We went to MBH when it opened...it was noisy but food was good. We stopped going because we also found it too noisy, and service was offhand. Finally we were served a substandard meal, and received only rudeness when we objected(politely). So we stopped going. This is the 4th place where we have stopped going to because of rudeness....we are wondering if this is cultural difference that we should get used to, or stick to our guns? We go to Bills regularly, love their service, and the fact they recognise us as valued customers, love it that we can get a beer at 7.30 in the morning, as this is when we are getting off from our night work so "dinnertime' for us.

Report Objectionable Content
Email Town Square Moderator
6 people like this
Posted by Office, not Bakery
a resident of Midtown
on Sep 15, 2016 at 5:51 pm

Big Box Catering by Asian Box has replaced the Breakfast House. Big Box Catering is the corporate office for all Asian Box stores! How did they get away with that in Midtown? Yes, they do cook in the kitchen and provide catering services. But this is not "retail" that serves the neighborhood like its neighbor restaurant Indochine. This is business to business catering in the back kitchen with mostly office space in the front. Per the PA Comprehensive Plan guidelines for Neighborhood Commercial spaces in Midtown, doesn't this violate City Land Use Codes? I saw no obvious evidence of a Gluten Free Bake Shop.

Please Apply So We Can Reject You!
By John Raftrey and Lori McCormick | 6 comments | 2,708 views