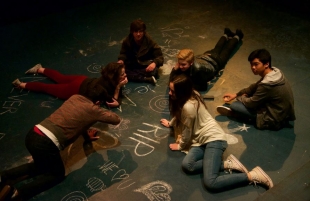 The cast of "A Beautiful Glass" reflects on lost friends. Photo by Jackson Wylder.

What if we stopped wondering whether the proverbial glass was half-full or half-empty and recognized it instead as simply a beautiful glass?

This philosophical reframing lies at the heart of A Theatre Near U's latest original production. In its various forms, art can be understood as a response to culture and society, and writer/producer/director Tony Kienitz's work is no exception. Kienitz created "A Beautiful Glass" in response to recent teen suicides in the Palo Alto area and the community's attempts at understanding the tragedies.

As the founders of A Theater Near U, Kienitz and his wife (co-director and producer Tanna Herr) are in their third year writing, directing and producing an original musical, this time with an 18-member cast ranging in age from 13 to 19. Each year, they've worked with local students they hand-picked -- students who are involved in theater productions at their schools and in the community at large and who are interested in receiving more focused training and experience. "A Beautiful Glass" will be performed in Mountain View and San Francisco.

As Kienitz delved into research for this year's show, he and Herr observed that many teens were in disagreement with the media's portrayal of them.

"The project started out as a response to the media portrayal of Palo Alto in particular, but (also) the Bay Area, ... as a place where teens were in trouble, and the teenagers here (were) saying, 'I don't see what they're saying,'" Kienitz recalled.

Herr noted that teenagers also were disagreeing with a lot of adults about why these suicides had happened. Additionally, Kienitz and Herr began to notice a pattern in the way that communities as a whole tended to address suicides.

"It started to become apparent and clear to us that a lot of the culture the way that communities deal with suicide is so hush-hush. There's a reason you don't publicize who the kid is, but in the end, it also does a disservice to that kid because it dehumanizes (him or her)," Kienitz said.

There was one conversation in particular that introduced a perspective upon which Kienitz expanded. A friend whose sister had committed suicide spoke of how the saddest part after her death was that it was as if her sister had never existed.

"(My friend) said specifically, 'If my sister had died of cancer, we would have had an annual celebration of her life. We would've talked about it all the time. People would've said, "Oh, remember how great she was?" But because she had depression and her illness killed her, nobody talked about it,'" Kienitz said.

This conversation informed the message and the script of "A Beautiful Glass," which tells the story of Justin Capps (played by returning cast member Atticus Shaindlin), who is trying to cope with suicides in his circle of friends while desperately seeking a "cure." A home-schooled senior, Shaindlin plans to attend Carnegie Mellon University, where he will study musical theater. Emily Liberatore, a senior at Gunn High School, plays the smart and idealistic Georgianna, with whom Capps forms a connection.

In addition to exploring the topic from the perspective of modern teens, the play also makes use of cultural and historical points of view, through the lives and deaths of historical figures such as Cleopatra and Vincent Van Gogh and literary figures including Romeo and Lady Macbeth.

The teens receive a unique, inside view of the process of developing an original work one that is written and adapted specifically for them as actors. Students are involved in almost every aspect of the production, from the score, to the lighting and stage managing. They had a hand in composing some of the music, at one point getting together for a jam session.

Since the play touches on so many stories and the topic is global, Kienetz said that rather than having one composer or lyricist, they chose to include a variety. Consequently, the play features different kinds of music, from traditional songs from certain eras to improvised and discordant alternative-rock songs that students created.

"It's been interesting because it's not like at school where you have a lot of adults walking you through it. Working with all the people -- they're definitely dedicated so that makes it a lot easier," said Jessica Wu, who's serving as stage manager.

"What I like about (Kienitz and Herr) is you sort of get a feel for your acting. They let you figure out your strengths, your weaknesses and what you need to work on, and they push you in a way that's so different than how (other teachers) push you," said Alexandra Dinu, a student at Palo Alto High School who will be playing the roles of Sylvia Plath, Portia and Nanette.

Despite the heavy topics of mental illness and suicide, the play is punctuated with surprising moments of levity and humor -- an intentional decision on Kienitz's part, since he believes that humor is crucial to portraying the characters as fully realized individuals.

"It's very uplifting and humorous in a lot of ways because these people were funny. The two people I wrote about that I knew were both really funny people," Kienitz said.

At the end of the day, Herr and Kienitz hope "A Beautiful Glass" humanizes some of the varied and untold stories of those who have died by suicide and, in doing so, brings to light some of the complexities and nuances that surrounds the issue.

What: "A Beautiful Glass," presented by A Theatre Near U

Where: Mountain View Center for the Performing Arts, 500 Castro St.

Info: Go to A Theatre Near You

Singapore's oldest cafe was about to open in Palo Alto. Then, the coronavirus hit.
By Elena Kadvany | 4 comments | 7,528 views

Repairing a Disagreement with your Beloved & “Physical” vs. “Social” Distancing
By Chandrama Anderson | 2 comments | 3,078 views