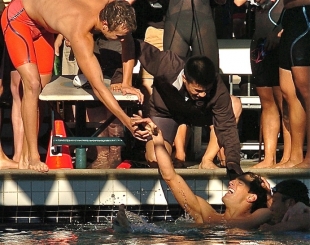 So proud of them!! Congratulations!!!!

Congratulations to a fine group of young men, and determined coaches. No own many of you boys for quite a few years. As a coach in the district I am proud of how you represented your school and your community. Thank you for the historic win. You gentleman have grown into fine young men and we at Palo Alto high school are proud of you. Enjoy the moment you deserve it.

10 people like this
Posted by Support Sports
a resident of Another Palo Alto neighborhood
on May 15, 2016 at 6:25 pm

Great job to all of the dedication of players and coaches. We are so lucky to have teachers who are willing to put their energy to after school sports. I wish they could be compensated for the hundreds of hours that they spend.
GO GUNN and PALY. Time for a parade?

Report Objectionable Content
Email Town Square Moderator
4 people like this
Posted by Lenn
a resident of Fairmeadow
on May 15, 2016 at 7:08 pm

Report Objectionable Content
Email Town Square Moderator
1 person likes this
Posted by what a day!
a resident of Barron Park
on May 16, 2016 at 9:11 am

Congrats to Paly girls and Gunn boys for their championships!. The final boys relay was the most exciting race ever! Good luck to everyone at the State Championships this weekend.

Report Objectionable Content
Email Town Square Moderator
7 people like this
Posted by Crescent Park Dad
a resident of Crescent Park
on May 16, 2016 at 12:30 pm

Not to detract from these historic wins and times, but we need to also tip our hats to the PASA swim club. Most if not all of the top Gunn and Paly swimmers train year-round with this outstanding program and coaches.

Flying: How to lower your impact
By Sherry Listgarten | 6 comments | 1,748 views