Recipients of grants honored at reception 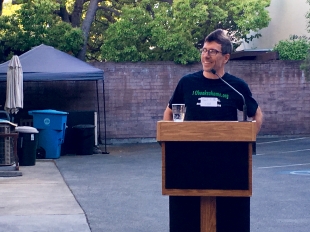 Paul Thiebaut, founder and CEO of 10 Books A Home, gives a speech at a reception for the Weekly Holiday Fund winners on Monday, April 25. Thiebaut received $15,000 for 10 Books a Home, an in-home tutoring and literacy program for preschoolers and kindergartners in East Palo Alto. Photo by My Nguyen.