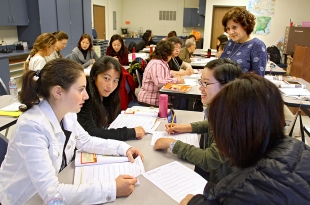 It's not just non-native speakers of English who are rude. The behavior you cite has less to do with cultural norms & more to do with just plain rudeness.
Haven't you ever had to step off a curb into a street to avoid getting mowed down by Palo Alto moms with double wide strollers, escorted by older kids & dads? I have, and since they're arguing the respective merits of Resto Hardware vs Pottery Barn, I'mm pretty sure they're long time locals. Or how about the clearly native born US folk who stand at the last step of the Nordstrom's elevator then discuss whether to go left or right? One day, I will kick them to get them to move so I & others behind me can safely exit. Watch out for the downtown sidewalk skateboarders who don't care who they scare while whooshing & zooming. This is especially bad on Santa Cruz Ave, Menlo Park, with middle schoolers.

Society has changed & the "Me Me Me" generations produced lately (by having too much money, among other things) lack situational awareness and good manners which used to help us all get along better.