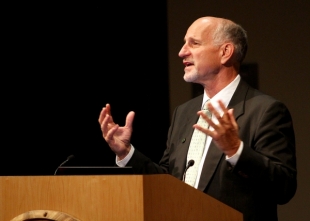 "Beyond the policy work that Burt believes can correct for these impacts, Palo Alto is deeply divided about what kind of community it wants to be in the future, and this will almost certainly lead to a hard-fought council election this fall."

It will be interesting to see how this plays out in 15 years, when the younger generation currently hard-pressed for housing will be the generation with children in schools. (In 2030, the 25-50 demographic will be entirely Millennials.) Will they change their minds about development now that they have had 15 more years to develop income and presumably have bought their own homes? Or will the struggles of their formative years change their perspective on the younger members on their generation?

It will definitely be an interesting dialogue about development then.

Posted by go pat
a resident of Charleston Gardens

Pat is a very dedicated mayor.
I am impressed.
He serves the community well.

Best wishes to Pat and our citizens of our beautiful Palo Alto. It is the heaven on earth.

Report Objectionable Content
Email Town Square Moderator
6 people like this
Posted by mauricio
a resident of Embarcadero Oaks/Leland
on Feb 27, 2016 at 6:32 am

Once the millennials Burt wants to accommodate have kids, they will need cars, although a large majority of them own cars already anyway. Unless those millennials can guarantee they will always have a job downtown or around California Ave, they will need cars. When are we going to stop this charade of ' If we only build high density housing downtown and around Cal ave we will solve the traffic problems.' We have traffic problems because we are a small town that is overpopulated and a large job center whose roads also serve Stanford. If we create denser housing, we will get denser traffic, period.

I would respect local politician like Burt much more if they came out and said:The pressure from developers, millennials and foreign buyers to move into Palo Alto is just too immense and I don't think we can sustain it.

Report Objectionable Content
Email Town Square Moderator
1 person likes this
Posted by common sense
a resident of Midtown
on Feb 27, 2016 at 8:05 am

And can you imagine when a person gets married, have kids? Will these same people now demand that different housing be built so that they can live in Palo Alto?

Why aren't these housing advocates demanding that companies pay a salary so that their employees can live in Palo Alto? Isn't that the better solution, than demanding the city rezoning neighborhoods for high density development?

Report Objectionable Content
Email Town Square Moderator
5 people like this
Posted by Be Positive
a resident of Leland Manor/Garland Drive
on Feb 27, 2016 at 8:30 am


The reality of housing in Palo Alto is that we are simply too desirable of a community for additional housing to have any impact on housing prices. We can add to our housing stock, but unless it is designated low-income, affordable housing, it will simply sell to the highest bidder.

Report Objectionable Content
Email Town Square Moderator
7 people like this
Posted by mauricio
a resident of Embarcadero Oaks/Leland
on Feb 27, 2016 at 11:09 am

The manhattan experiment with building high density micro apartment has failed miserably vis-a-vis keeping them affordable. Each time an occupier moved out, as young people do when they get married and start having kids, their price kept shooting up and is now equal or higher to much larger apartments. It will fail in Palo Alto too if we go that route, because the area is much too desirable. All the ideas of building dense smaller units will create is more density, more traffic congestion, more pressure on the infrastructure and will definitely not solve the problem of housing affordability. No matter how fast we densify, the demand would be infinitesimally higher than the city's ability to satisfy it. It will only drive the price up, especially as foreign investors will undoubtedly jump into the bidding process for those units.

Flying: How to lower your impact
By Sherry Listgarten | 8 comments | 1,883 views