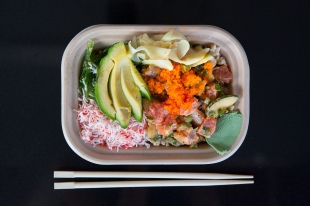 Poké Bar's tuna poke with ponzu sauce and spicy mayo, masago and avocado, served over brown rice with a side of crab meat and seaweed salad. Photo by Michelle Le.

poke-ay???? Really? Really? How many haoles involved with this story? :) I guess they would pronounce haole as howl-ay. Ha!

This place has lost all creditability and interest from me if they are really spelling it poke and pronouncing it as such, but then again I was only born and raised in Hawaii for the first 18 years of my life. Yes, I know many people like to spell it Hawai'i.

I have actually been to this PokÃ© Bar place on Castro Street. It is really more Los Angeles-style than Hawaiian-style, which is perhaps why they pronounce it that way. You can find a more authentic (though more expensive) poke bowl at Aloha Fresh in Cupertino, and they do pronounce it correctly there. Some of the poke places in San Jose are supposed to be good, but traffic is so bad in San Jose that I rarely go there (and some them say po-KEE).

@moke - Mahalo for suggesting Aloha Fresh in Cupertino. I'll check them out.

Report Objectionable Content
Email Town Square Moderator
9 people like this
Posted by Humble observer
a resident of Mountain View
on Feb 27, 2016 at 10:18 am

"similar to a Chipotle" -- How about "similar to Asian Box," please! Chipotle Grill has regrettable connotations about food safety, after numerous incidents around the US since 2008, hundreds of people sickened: Web Link

Chris wrote: "This place has lost all creditability and interest from me if they are really spelling it poke and pronouncing it as such, but then again I was only born and raised in Hawaii for the first 18 years of my life."

It's unfortunate of course if the place lost credibility with you, but (1) this website can't render the exact spelling with the bar (macron) e -- the same problem came up in earlier reporting here about this fast-food specialty; (2) a restaurant must serve its local market, and I'd guess very few of the people queueing up for Poke Bar were Hawaii-raised. This food specialty happens to be fashionable, witness many other Poke places springing up statewide.

I agree that Aloha Fresh is where to go for an authentic poke bowl, pretty much how you'd get it in Hawaii. They highlight the fresh fish, as opposed to the toppings. It may seem pricey but you will get far more fish (that can easily be shared) than you do at the new local Chipotle-style poke shops that are popping up around here.

Report Objectionable Content
Email Town Square Moderator
2 people like this
Posted by resident
a resident of Mayfield
on Jul 28, 2016 at 6:24 pm

Takahashi Market in San Mateo also has really good poke, as well as mochi, poi, and other goodies.