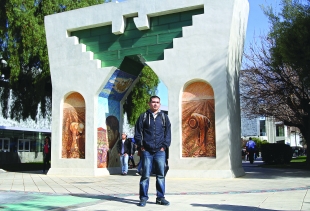 Javier, a student at San Jose State University, stands beside the Cesar E. Chavez Monument at the university on Feb. 3. Photo by Veronica Weber.

Flying: How to lower your impact
By Sherry Listgarten | 6 comments | 1,732 views