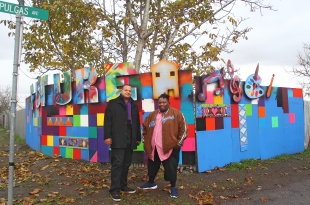 I've worked with EPA youth for almost 20 years. Here comes yet another "program" needing non-profit dollars. I'm pretty cynical. The largest employer in EPA is the aggregate of all the non-profits. Gentrification is coming, and it's coming quickly. I remember when south Palo Alto was the blue collar neighborhood -- full of plumbers, electricians and manufacturing workers. Now all the homes are $2+ million and it takes 2 adults with IPO stock to buy one. EPA is too close to all the good jobs, and the schools are getting much, much better.

The corner of Runnymede and University was going to be a big Computer Center for the community 15 years ago -- but that died because the community all got tech in their homes and on their smart phones.

If you want to preserve the heritage of EPA, why not go back to the time of the Japanese farmers who left during WW2?

I, too, remember when South PA was blue-collar. When I was growing up in EPA, a family friend who lived in PA near Page Mill and El Camino worked as an auto mechanic. I also want readers to recognize that not all EPA residents are against gentrification. I, for one, am welcoming it and think it will make an improvement rather than creating a negative effect.

Report Objectionable Content
Email Town Square Moderator
14 people like this
Posted by Michael
a resident of Adobe-Meadow
on Jan 15, 2016 at 12:22 pm

I have been involved in work in East Palo Alto for about 22 years and think the Goldman Foundation/Youth Action Team project is quite different from anything else that has happened in the EPA nonprofit sphere. I worked at Plugged In, the organization that was suppose to build the community technology center at University and Runnymede. That project died because money was provided to buy land but not to construct a building and the group was then unable to raise the money for the building. In the case of the Goldman project sufficient resources are going to be part of the picture to see a building through to completion. Plus the steps going forward are based on around five years of prior community engagement. East Palo Alto has seen many many nonprofits come and go both for lack of both sufficient resources and lack of a long term vision for sustainability. The Youth Arts and Music Center will also be a major step towards high quality and purpose-driven architecture in East Palo Alto's first true "Main Street" on Bay Road. I think it is undeniable that this project is unlike any previous nonprofit effort in EPA and well-positioned both for programmatic success and to be part of a vital new downtown. The Goldman Foundation and all participant should be applauded for the effort.

Report Objectionable Content
Email Town Square Moderator
14 people like this
Posted by Sarah
a resident of East Palo Alto
on Jan 15, 2016 at 12:22 pm

There is so much artistic talent in EPA and I'm glad there will be a place for young folks to hone their crafts and spread their messages. While EPA residents also need security in terms of living situations, this kind of investment in the community is also needed.

Wow!! This is the power of art! This could be a much-needed anchor of inspiration and art that could challenge the displacement of people and culture. We're showing the rich culture of this city. I'm proud to have seen the process of this project over the five years. Shout out to Isaiah, Mary, MMAP, LIP, YUCA, and all of the brilliant young minds that have shaped this project. #DontLetGoEPA

Report Objectionable Content
Email Town Square Moderator
7 people like this
Posted by yay
a resident of Evergreen Park
on Jan 15, 2016 at 1:31 pm

hooray for this. It's about time that we get some more grass roots art going on in this community. I love it and I know these youth will have a lot to say and express.

Three generations of my family have lived and died here in E.P.A. No, the community has not always been the best, but it has always been home. Despite all the "bad" stuff, there has always been something about E.P.A that made people want stay. It was never the golf stores or office buildings, but the diversity and the good vibes in the midst of all chaos. I am all for improving the schools and infrastructure here, but not if it means the natives have to leave. We deserve to enjoy the change, but this change is not for us. The new people get sidewalks, they get better roads, they get a safer neighborhood, but the people who have survived in and fought for E.P.A get the boot? So many of us have been victims of the effects of marginalization(school to prison pipeline, dependence upon the illegal economy sector because all the legal sector is willing to give you are manual labor jobs that dont have living wages, poor physical/mental healthcare). Its time that we get the care that we deserve. To send us off to Stockton, and other growing ghettos is bs. To those that celebrate/welcome gentrification, soon you will also be unwelcomed and then your view will change. This art and music center, no matter who decides to frequent it, will always be the real E.P.A to me. Even after all of my family members are forced out, and none of them can enjoy this baby Palo Alto they are creating, that center will always be ours. How one could support the new downtown but not this center and its purpose, I will never understand. I may not be in E.P.A after this year, but I will never forget. I might just be a neighbor one day, and wherever I go the hood is welcomed. Yall aint rid of us yet!

Report Objectionable Content
Email Town Square Moderator
5 people like this
Posted by Larry Moody
a resident of East Palo Alto
on Jan 16, 2016 at 9:32 am

This is All good news..for the city and the peninsula...

Local leaders have worked hard over the years to create a healthy environment for partnership; where a discussion on this nature can take place.
Goldman,Stanford and others would not be open to such a relationship 20 yrs ago.. when Isiah was a baby..but in todays East Palo Alto and because of the commitment of organization like Live In Peace, One East Palo Alto, Ravenswood Education Foundation and many others.A cultural arts music center is possible.which will support the needs of the youth and the voice of the community...Say it with me..City on the Move...

'Are they ready for fully innovative Indian food?' Ettan arrives in Palo Alto with chaat, caviar and a secret menu
By Elena Kadvany | 0 comments | 3,724 views

Flying: How to lower your impact
By Sherry Listgarten | 15 comments | 2,655 views