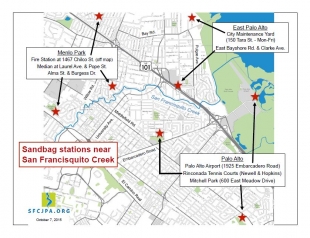 Sandbag locations are being coordinated by multiple cities to prepare for the 2015-16 winter storms. Image courtesy of San Francisquito Creek Joint Powers Authority.

I am disgusted that this work on highway 101 has not been completed in a timely manner. The fact that a wall that has been built now has to be dismantled is beyond belief, particularly if it will have to be built again next summer for the work to continue.

This bad management is unforgiveable. Why Palo Alto did not insist that Caltrans work was not done 24/7 around the clock is unfathomable. We have already had a couple of major accidents as a result of this work and the fact that emergency vehicles cannot get to the accidents makes it ten times worse.

I can't believe that this state of affairs is going to go unchecked during the winter rainy season. I wonder how many more serious accidents are going to be caused by this lane shift of narrow lanes in heavy rain.

I live upstream of the Pope-Chaucer Bridge - along the Creek. I've seen no evidence of any Creek-clearing activities between Middlefield Rd and that Bridge. There's a lot of debris, dead trees, etc. We're at the self-imposed deadline of mid-October. Winter is coming...

Report Objectionable Content
Email Town Square Moderator
9 people like this
Posted by Slow Down
a resident of Community Center
on Oct 15, 2015 at 3:59 pm


A previous article stated that willows could not be cleared from the creek because of native species regulations. Anyone know what specific regulation is causing that stupidity?

I doubt that removing some "trash" and "recyclables" will have much of an impact on flooding. The creek is filled with downed trees, branches and brush that are more likely to cause flooding. When will that be addressed? It seems like the cities and counties are avoiding the hard work that is necessary.

Report Objectionable Content
Email Town Square Moderator
11 people like this
Posted by Remove Chaucer
a resident of Crescent Park
on Oct 15, 2015 at 5:13 pm

Vegetation in the creekbed upstream of the Chaucer-Pope flow restrictor slows the water velocity and stores water which would otherwise rush directly to the bridge, pile up, and overflow.

Report Objectionable Content
Email Town Square Moderator
16 people like this
Posted by No Cleanup
a resident of Another Palo Alto neighborhood
on Oct 15, 2015 at 5:34 pm

It was reported last week in the Daily Post that the creek had been cleaned up. This weekend I visited good friends who live in The Willows, near Woodland alongside the creek. They showed me all kinds of brush, wild shrubs growing in the creek bed, and very old-looking fallen tree limbs that they told me had been there at least four years. This is to say nothing of homeless people and their tents in the creek bed.

Obviously, if any cleanup was done, and it doesn't look like any was done, it must have been mighty superficial, and barely scratched the surface of all the serious debris that remains.

Report Objectionable Content
Email Town Square Moderator
9 people like this
Posted by Midtown
a resident of Midtown
on Oct 15, 2015 at 7:42 pm

More lip flapping. Until the two bridges and the forest in in the creek are gone, be prepared to swim.

Report Objectionable Content
Email Town Square Moderator
4 people like this
Posted by Slow Down
a resident of Community Center
on Oct 15, 2015 at 9:55 pm


@Remove Chaucer - You've come up with the best solution, just fill the creek with junk to slow the water down.

Report Objectionable Content
Email Town Square Moderator
9 people like this
Posted by Plane Speaker
a resident of Crescent Park
on Oct 15, 2015 at 10:41 pm

Well, every time I cross over one of our bridges that spans the creek I look down there and I'll be damned if I can see any clearing of the creek or anyone doing any work to clear out the creek of trees and bushes growing down in there. I just wonder WTF is the city waiting for? GET THE CREEK CLEARED OUT, PLEASE - PRONTO!

Report Objectionable Content
Email Town Square Moderator
5 people like this
Posted by midtown
a resident of Midtown
on Oct 16, 2015 at 10:29 am

Sterling Canal / Matadero Creek is also unforgiveably full of sediment and vegetation.
All summer long we wait, assuming they will use the dry time to bulldoze for safety.
But nope.

To whom can we send pictures and concerns?

Since mid-September, Palo Alto, along with the Santa Clara Valley Water District, Menlo Park and East Palo Alto crews began removing trash and non-native or dead plant life and trees from the creek. Several individuals have made the observation that many large areas of plant life and trees still remain in the creek. These areas have been identified as native species and are not allowed to be removed according to California State Water Board regulations without a permit. The reason these areas of plant life and trees are not permitted to be removed is because they serve as habitat to animals and birds. It has been our experience that during high flow rain events these areas do not obstruct flow and often bend with the power of the water flow. Obstructions do not typically develop in the areas do to the sheer power of the water flowing over them. In some cases many of these areas of foliage help keep the creek banks in place and reduce the risk of collapse.

Report Objectionable Content
Email Town Square Moderator
10 people like this
Posted by Stephen
a resident of Duveneck/St. Francis
on Oct 17, 2015 at 12:10 pm

To Mr. Hospitalier: With all due respect, you are wrong about the effects of vegetation in the channel on flow. Speaking as someone with a PhD in hydraulic engineering, any trees/bushes in the channel cross-section will act as drag elements and will increase the flow depth for a given flow. I.e., they will be obstructions. They also tend to collect debris, further increasing resistance. Moreover, while it is important to protect native vegetation, some of the most egregious examples of vegetation in the channel that I have seen are non-native, e.g. Eucalyptus trees. However, as you point out, bank vegetation can generally serve the important role of protecting the banks of the creek. Unfortunately, as seen in 1998, when a tree on the bank in Menlo Park downstream of the Chaucer bridge fell in to the creek and likely caused a rise in upstream water levels, bank vegetation can also have a negative effect on conveyance. In any case, thank you for pointing out the fact that we must continue to think about the natural environment of the creek when thinking about flood protection.

Report Objectionable Content
Email Town Square Moderator
9 people like this
Posted by Dead Wrong
a resident of Another Palo Alto neighborhood
on Oct 19, 2015 at 2:20 pm

Trees and woody shrubs, native or not, will not bend in the water flow. They will drown when the water level rises anyway, so why not extract them before they cause trouble in the form of debris getting caught in them and forming a blockage?

>>public officials said they are doing everything possible to reduce hazards to homes and residents if the notoriously volatile San Francisquito Creek surges out of its banks.

This sounds like kind of a joke ... what is "everything possible" ... does that mean talking about it online? Because I don't see anything being done but talk and excuses. Just look down the creek and you can still see lots of bushes and trees and the silly explanation that it is somehow environmentally bad ...what kind of lame excuse is that exactly?

Whoever said that you have to let bushes and trees grow in the middle of a creek and endure flooding. Who made this determination and based it on what? If that was true, why didn't they take the years and years to get a waiver on that from the state or whoever it is that can give us a pass on that so we don't get flooded.

Maybe the time to do something would not have been to wait until the rains are almost upon us.

I think there must be some toxic chemical loose in downtown Palo Alto that makes people allergic to logic and work. Better call out out the EPA and get it cleaned up.

This is like the NOLA hurricane Katrina, they know something is going to happen and do nothing about it. Anyone read or hear about Naomi Klein's The Shock Doctrine: The Rise of Disaster Capitalism. When developers want to get their hands on something they just neglect to take care of it or do their jobs and the some natural disaster comes along and wrecks it so it can be bought up and developed cheap.

In the last big supposed 100 year flood I saw it wipe out houses all over South Palo Alto and 101 area. 2 feet of water and mud in all the houses in that area, a total of waste or resources. Contractors all busy so costs went up higher than normal. and over 15 years to plan and think about what to do and virtually nothing has been done. This really ridiculous.